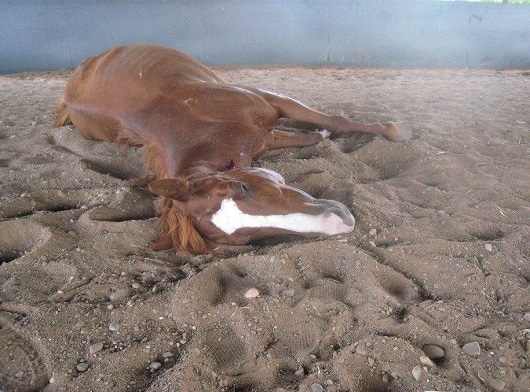 A Wisconsin rancher was found guilty Thursday of mistreating his horses after four were found dead and more than a dozen were discovered neglected. A Polk County jury convicted Michael Allen Feist of 34 counts after a four day trial.
The investigation into Otter Creek Ranch began in September 2013 when officials received a tip regarding undernourished horses on the property owned by Feist and his chiropractor wife, Dr. Brenda Weierke. The complaint states it wasn’t the first report regarding allegations of neglect at the ranch.
Upon inspection, a deputy noted the farm housed a herd of about 80 horses. A veterinarian noted more than a dozen of the horses were in “nutritional distress.”
In November, four horses were discovered dead by authorities, leading to charges. Another 30 horses were considered “in grave danger,” by the veterinarian on the case.
Feist was found guilty of four felonies. Each felony carries a maximum sentence of 3 1/2 years in prison. The 30 misdemeanor counts each carry a maximum penalty of nine months behind bars. Feist is scheduled for sentencing on June 2nd.