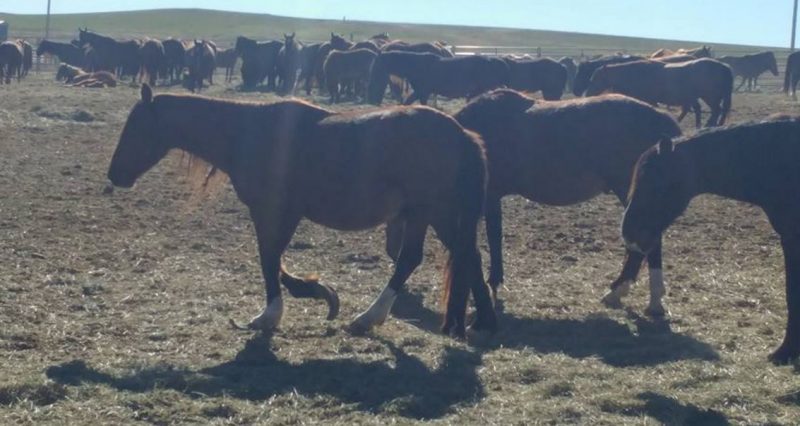 A South Dakota prosecutor confirms no charges will be filed against a wild horse sanctuary operator accused of neglecting hundreds of horses. At least 30 horses allegedly died due to Karen Sussman’s neglect this year.

Steven Aberle, State Attorney of Dewey County, said in a statement that Sussman cooperated once authorities got involved. Sussman is the president of the International Society for the Protection of Mustangs and Burros (ISPMB).

Aberle says, “unless there is intentional abuse or willful neglect, prosecution for abuse or neglect are pretty uncommon.” He adds the whistleblowers didn’t believe Sussman should be prosecuted criminally.

Authorities continue the day-to-day care, although Sussman remains in control of the horses’ lives. That’s because the stipulation agreement allows Sussman to manage the horses’ adoptions. Horses not adopted before December 1 will go to auction.

Adopters have re-homed about 65 horses, according to Dewey County Sheriff Les Mayer.

Some in the horse community are questioning Aberle’s decision, which they say is enabling a woman accused of horse abuse.

Sussman displays the characteristics of an animal hoarder, as described by experts. They state hoarding satisfies the person’s need to collect and control animals and is not about the animals’ needs.

Animal hoarders collect large numbers of animals, fail to provide for their basic needs and deny the animals’ horrific conditions.

Arizona horse rescue operator Catherine Ritlaw says Sussman should be charged. If convicted, Ritlaw says a judge can order Sussman not to own horses and get the counseling she needs. “I am outraged. I think [Steve] Aberle is a coward and not upholding cruelty statutes.”

Sussman continues to plead for $150,000 worth of donations from the public online and by mail like nothing has happened.

Outraged horse advocates say they are stepping up their efforts by contacting the South Dakota Office of Attorney General and the Internal Revenue Service regarding the management of the non-profit’s funds.

Despite Sussman’s previous missteps, the stipulation agreement allows Sussman to reclaim her horses if she has a plan and proves she can fund the animals for 18-months. Sussman’s plan states she wants to regain control of 400 horses. Authorities found her plan was not comprehensive enough, but they are working with Sussman to revise it.

Concerned wild horse advocate Ritlaw says she believes people including John Christopher Fine are pulling strings on Sussman’s behalf. Fine, a New York resident has written favorably about the purported horse sanctuary for years. In 2015, the governor gave Fine an award for being a “great friend to the state of South Dakota visitor industry” since his dozens of articles garnered “millions of dollars in advertising value for the state”.

Sussman re-paid $30,000 to the counties for their expenses due to feeding the horses. The remaining balance of $46,000 is now due.

Note: The Perkins County prosecutor dropped the felony criminal case against Karen Sussman because she paid her $9,000+ debt.