Will help come in time for Eli the Arabian?

Horse welfare proponents are fighting to get help for horses at a Canadian stable that bills itself as an equine sanctuary. Although, the Ontario SPCA said late last week the remaining horses are in “improved overall health”.

The agency says an OSPCA officer and veterinarian have been on the horse farm owned by Sandra Reed, near Peterborough, multiple times since July 12, 2016. It is unclear why it took the agency five-months to respond to animal cruelty allegations at Whisper Ridge Equine Sanctuary. The first complaint, obtained by Rate My Horse PRO, was filed in March. We are awaiting a response from OSPCA.

Timeliness is an important factor in any animal cruelty investigation, but especially in Ontario. By law, all evidence must be less than six-months-old, the agency states.

OSPCA said the animals are receiving the care they require. A farrier is also scheduled to visit the property.

Interestingly, OSPCA said in a statement, “unverified images depicting extremely thin horses have been circulating on social media, but officers attending the property did not find animals in that condition.” 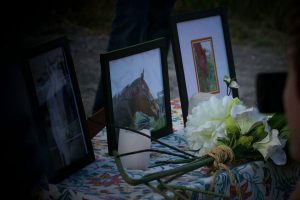 Multiple horses died earlier this year and others have been removed from the property more recently.

On July 15th, a photo of the Arabian Eli was taken at Whispering Ridge. Slightly built, the horse’s eyes are still bright, but his hip bones and ribs protrude from his skin. Eli stands at the gate and appears to be waiting for something.

Faith Robinson witnessed the alleged abuse first hand at Whispering Ridge Equine Sanctuary and says she doesn’t understand what OSPCA is doing. “How many more horses need to die for the OSPCA to take action?”

“More horses are going to die if we do not save them,” Robinson says. “And if the OSPCA continues to not be of assistance than it truly sheds a light on the corruption in the system and also puts the blood on their hands.”

Update: The OSPCA closed the criminal investigation and did not bring charges against Sandra Reed. 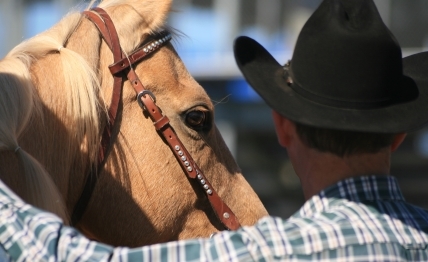 A horse in Saskatchewan, Canada has been confirmed with the neurological form of the equine herpes virus (EHV-1), according to officials with the Western College of Veterinary Medicine at the University of Saskatchewan....
Read More