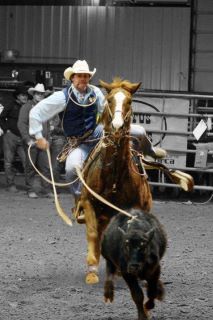 Oklahoma officials issued an arrest warrant today in the stolen horse case for Wendie Cox. Cox is the mother of the alleged mastermind behind the plot, Jaci Rae Jackson. Cox is wanted by McCurtain County authorities for cruelty to animals and knowingly concealing stolen property, which are felonies.
Five horses, a horse trailer, and tack were stolen from Southern Arkansas University rodeo team members in November 2011. It is still unclear why Jackson allegedly put together the theft and how it led to the death of the roping horse, Credit Card. Jackson names William (Billy) Hamilton as the individual that butchered the gelding. Jackson “watched as “Credit Card” was shot in the head and had its throat slit by a William “Billy” Hamilton. Jackson went further in stating that Credit Card was then “quartered” or cut into numerous pieces by Hamilton and an identified juvenile for easy transport and disposal.”
Hamilton was arrested in early May and told Arkansas investigators the rodeo horse’s death was from a pasture accident where he “had a t-post through his stomach, with his guts hanging out.” Hamilton claims the horse died in the corner of the pasture and that he doesn’t know who cut the horse up. Hamilton is charged with six counts of theft of property in Arkansas.
The remaining four stolen horses were left tied to trees without any food or water to sustain them. The horses were rescued and brought back to health by the owners.
Hamilton was transferred by authorities to Pike County, Arkansas today in preparation for a court appearance in an unrelated case.
Oklahoma officials say their investigation continues into Hamilton’s role in their case.
Jackson and Cox are scheduled to be back in court in Oklahoma on Monday, June 4 to be arraigned in the stolen horse case and an unrelated arson case. Stay with Rate My Horse PRO for the latest in this case.