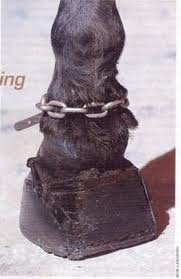 by Sally Baker, APR
The American Veterinary Medical Association (AVMA) and the American Association of Equine Practitioners (AAEP) today called for a ban on the use of action devices and performance packages in the training and showing of Tennessee Walking Horses. These devices and packages are implicated in the practice of soring, which is the abusive act of intentionally inflicting pain to accentuate a horse’s gait.
“Soring has been an illegal act for more than 40 years. Nevertheless, increasingly shrewd and more difficult to detect – yet equally painful – methods of soring continue to plague the Walking Horse Industry,” said Dr. René A. Carlson, President of the AVMA. “America’s veterinarians are asking USDA – APHIS to prohibit the use of action devices and performance packages in the training and showing of Walking Horses, because they appear to be facilitating soring,” Dr. Carlson added.
“The soring of Tennessee Walking Horses is an extremely abusive practice and it must end,” said AAEP President Dr. John Mitchell. “We urge a modification to the Horse Protection Act so that all action devices and performance packages are banned.”
Action devices used in the training and showing of Tennessee Walking Horses include chains, ankle rings, collars, rollers, and bracelets of wood or aluminum beads. When used in conjunction with chemical irritants on the pastern of the horse’s foot, the motion of the action device creates a painful response, resulting in a more exaggerated gait. Foreign substances are being detected on the pastern area during pre-show inspections at an alarmingly high rate, according to U.S. Department of Agriculture statistics. While there is little scientific evidence to indicate that the use of action devices below a certain weight are detrimental to the health and welfare of the horse, banning action devices from use in the training and showing of Tennessee Walking Horses reduces the motivation to apply a chemical irritant to the pastern.
The United States Equestrian Federation (USEF), the national governing body for equestrian sport in the United States, disallows action devices in the show ring for all recognized national breed affiliates. The AVMA and the AAEP commend the USEF for this rule and urge the USDA-APHIS to adopt similar restrictions for Tennessee Walking Horses.
Performance packages (also called stacks or pads), made of plastic, leather, wood, rubber and combinations of these materials, are attached below the sole of the horse’s natural hoof and have a metal band that runs around the hoof wall to maintain them in place. Performance packages add weight to the horse’s foot, causing it to strike with more force and at an abnormal angle to the ground. They also facilitate the concealment of items that apply pressure to the sole of the horse’s hoof. Pressure from these hidden items produces pain in the hoof so that the horse lifts its feet faster and higher in an exaggerated gait.
Because the inhumane practice of soring Tennessee Walking Horses has continued 40 years after passage of the Horse Protection Act, and because the industry has been unable to make substantial progress in eliminating this abusive practice, the AVMA and the AAEP believe a ban on action devices and performance packages is necessary to protect the health and welfare of the horse.
Jackie McConnell Pleads Guilty to Federal Charge
Graphic Undercover Video: Jackie McConnell’s Alleged Methods
Federal Grand Jury Indicts Horse Trainers of Soring, Conspiracy