Rate My Horse PRO obtained Kristen Williams’ permission to print her name for this article.

Mandarino’s attorney, Tamara Tucker, has put out multiple public statements and press releases in various internet forums and publications since the ruling was announced. Her latest states “. . . after sending the [necropsy] report to the CEO of USEF [John Long], USEF declined to bring its own charges. Ms. Williams chose to proceed with the protest on her own and it was found to be unsubstantiated because she was unable to present any evidence of a violation of USEF rules.”

We tried to reach Long on Monday regarding Tucker’s statement, but he is reportedly out of the country. USEF’s General Counsel Sonja Keating says she is unable to comment on the matter at this time.

We reported last week that the protester, Kristen Williams, was guided through the protest process by several USEF staff members. Additionally, she says she was never made aware that anyone from the organization had received the necropsy report; that it had been reviewed by licensed veterinarians; or that the report excluded the injection as a contributing factor in the pony’s death.

Despite repeated requests, Mandarino would not turn over any portion of the necropsy report to Williams – and only shared “portions of the toxicology report”, according to the panel’s report. The latter is inconsistent with a statement Tucker put out on November 6, stating, “…the Hearing Panel was also provided with the full toxicology reports…”

According to the initial protest, Williams and her 12-year-old daughter “watched as Elizabeth walked into the stall to administer an injection to Humble.” Williams says she never saw the needle press the skin, and never claimed she did. Despite this, she says the finding’s report incorrectly states she observed Mandarino “administer an injection.” Williams says she is asking USEF to correct the erroneous statement.

Tucker notified Williams’ attorney on Monday that she and another protester in a separate matter are being added to a “conspiracy and defamation” lawsuit previously filed. You may remember, Rate My Horse PRO is one of twelve defendants currently named in AMBER HILL FARM, LLC, Plaintiff, v. SAMANTHA LAWTON-DUTHIE, et al, Defendants. 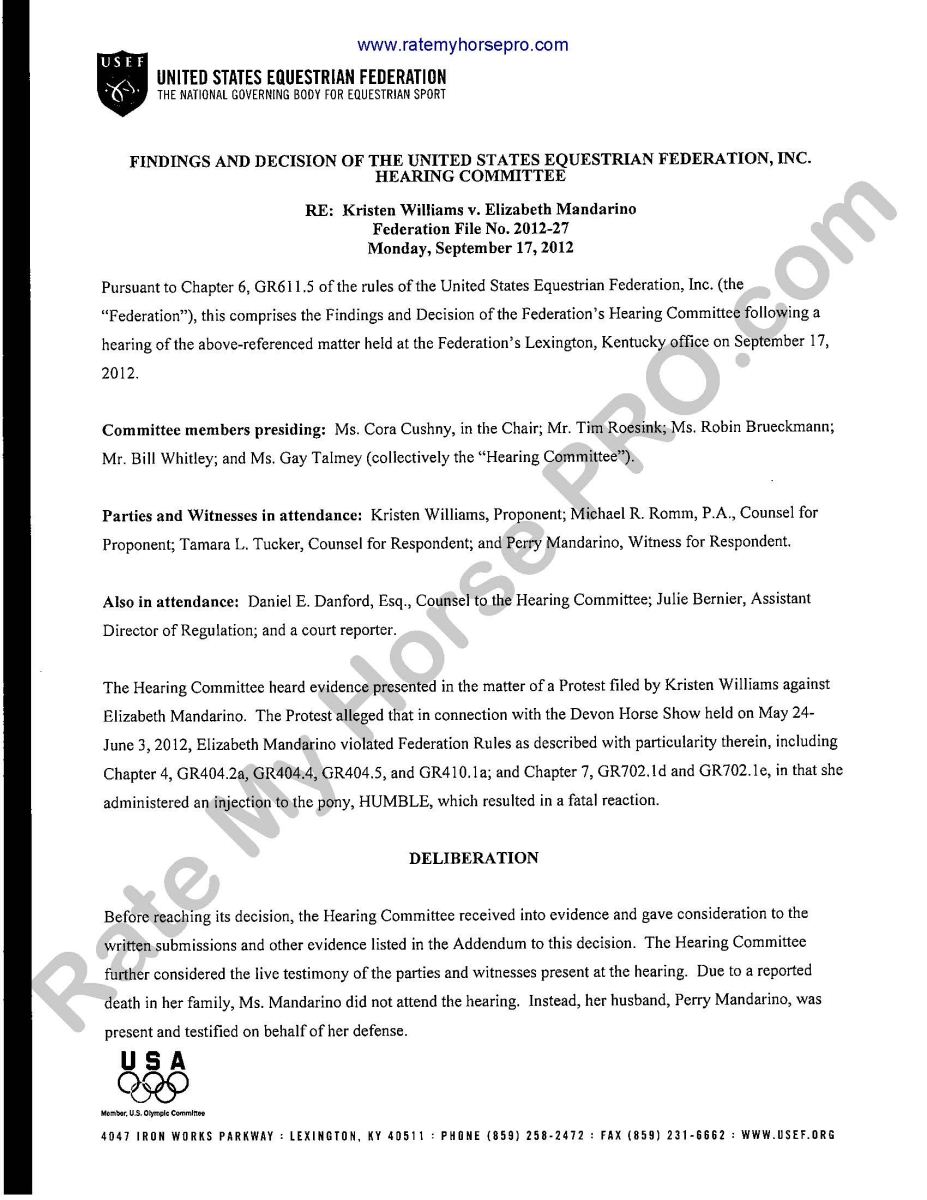 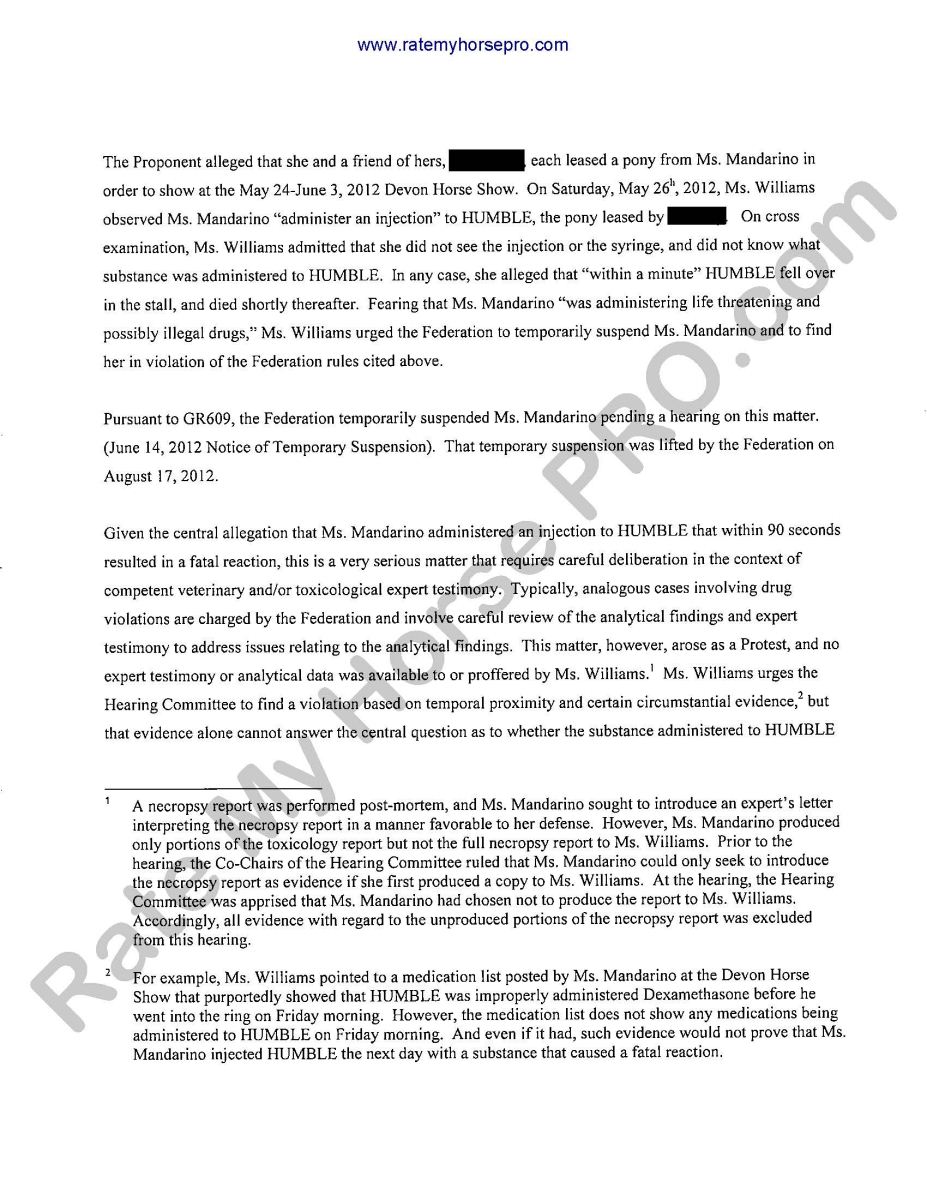 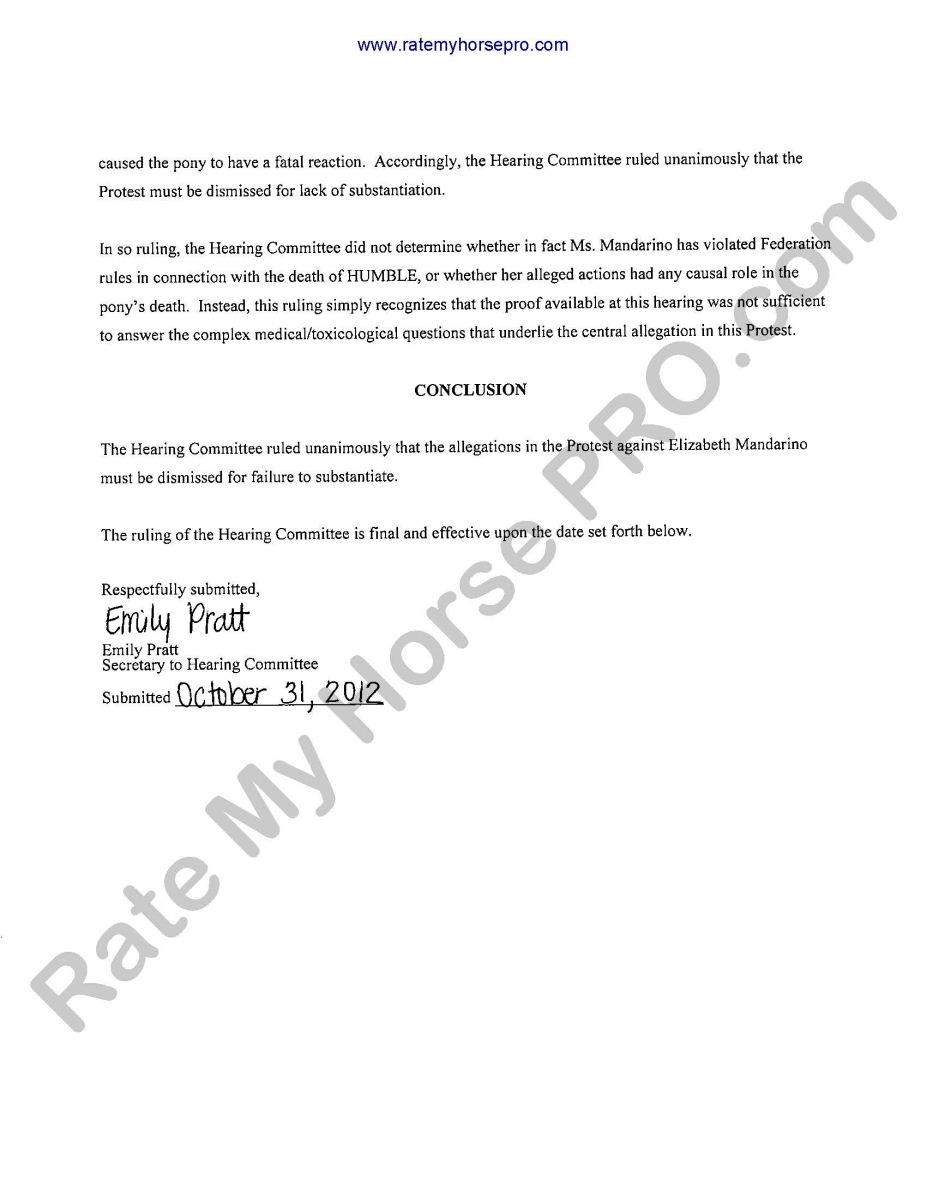 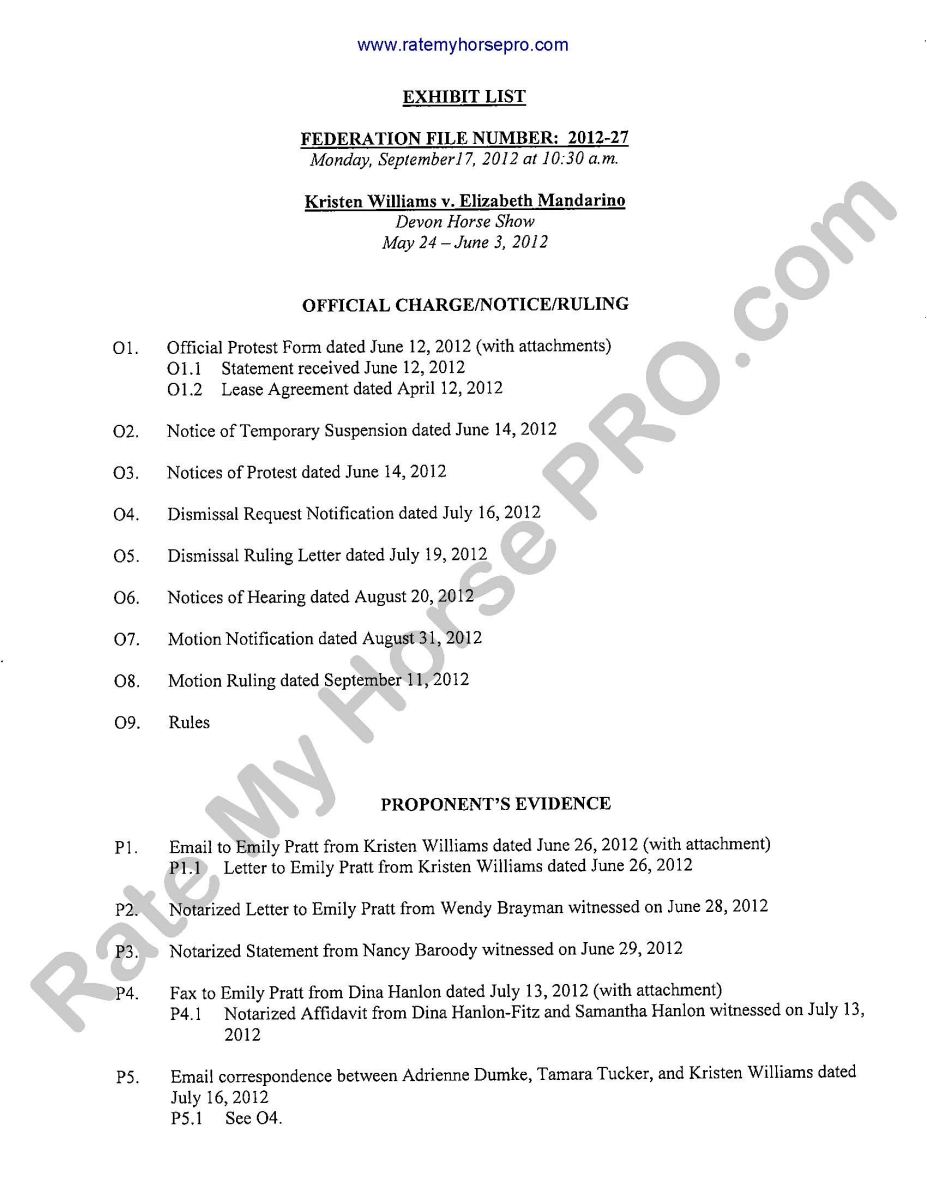 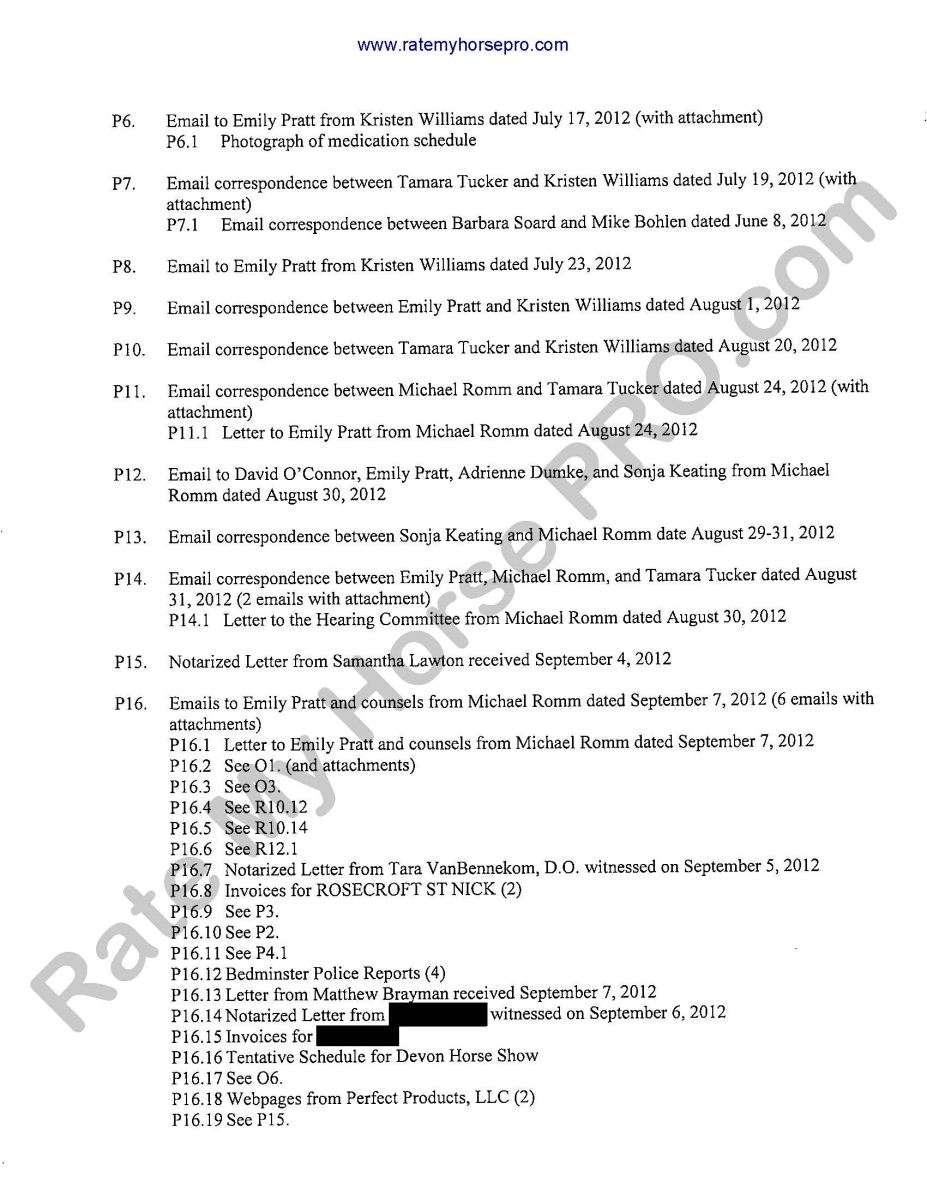 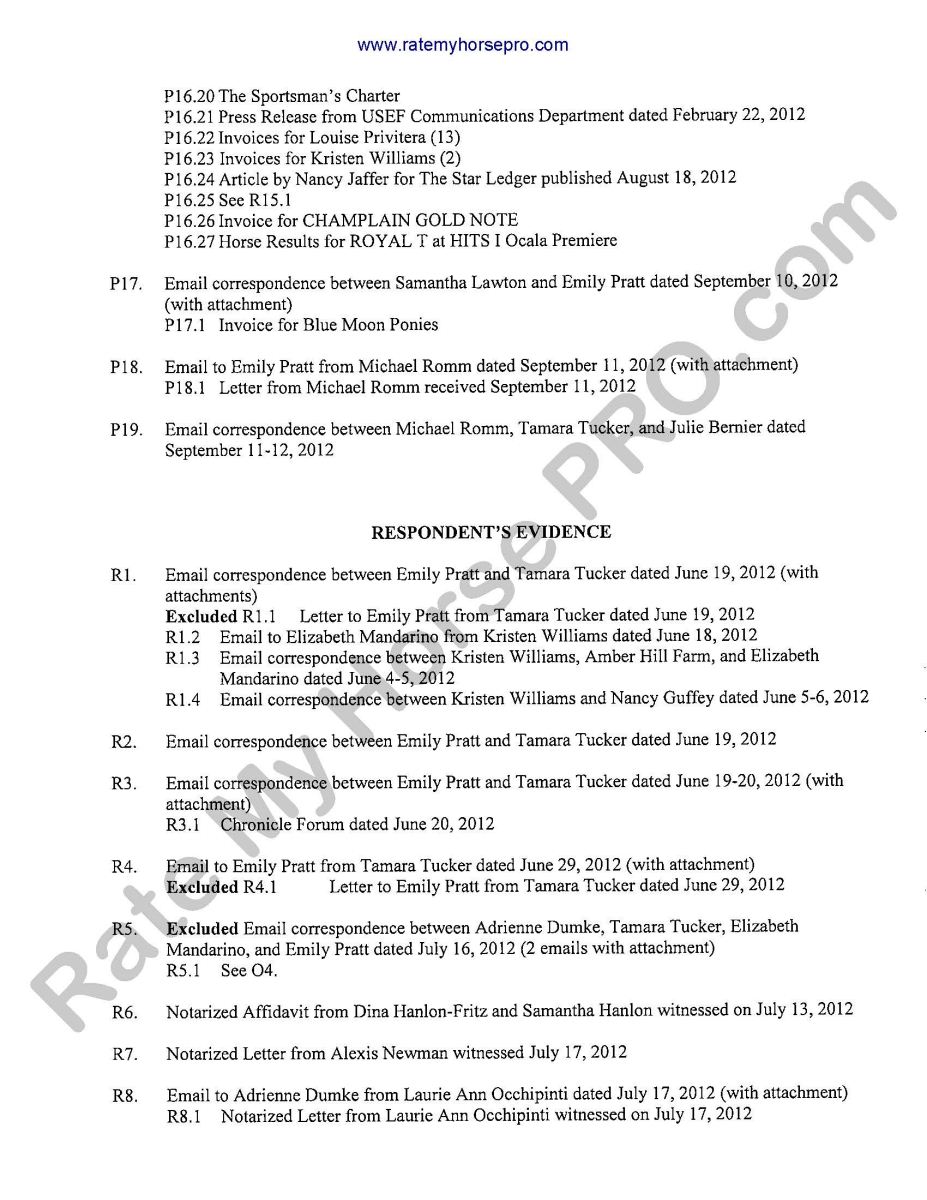 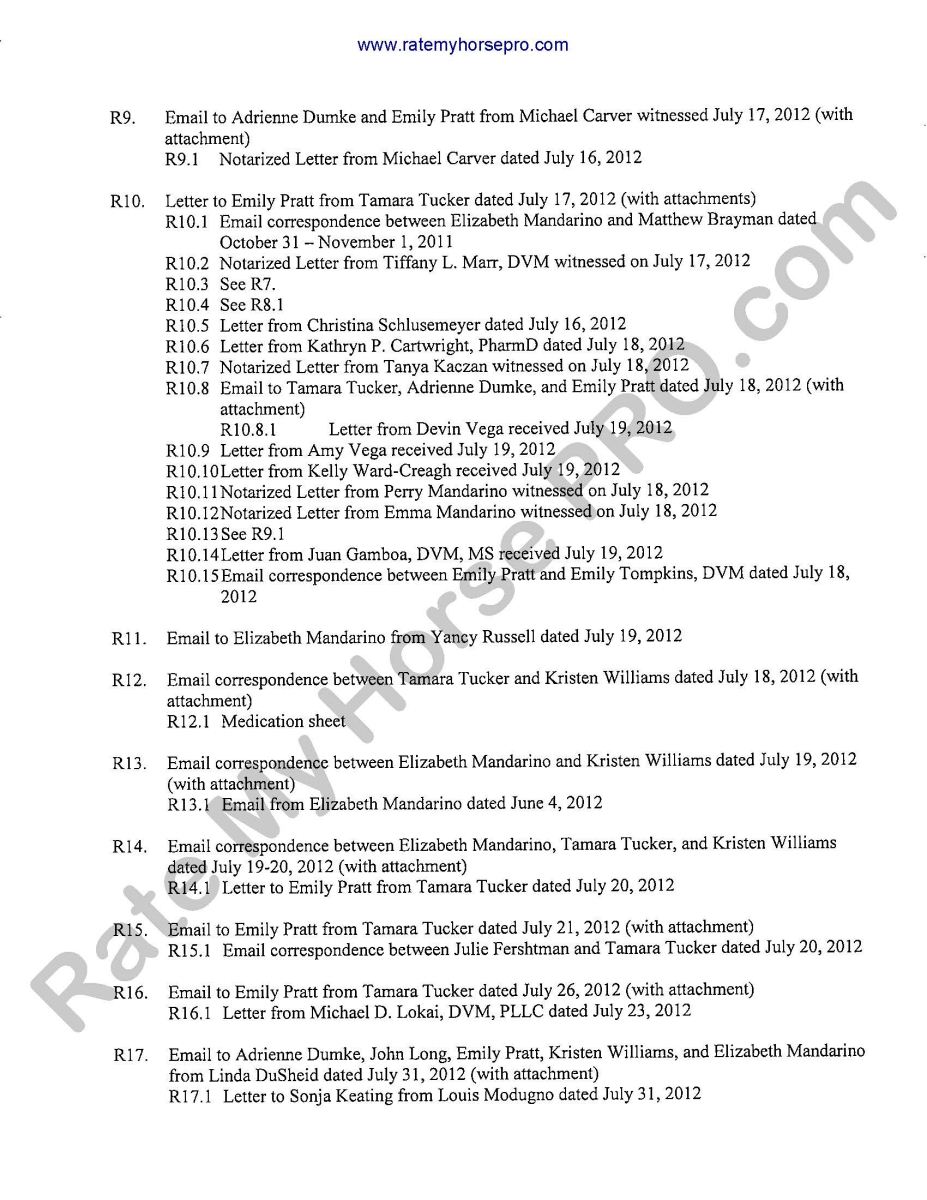 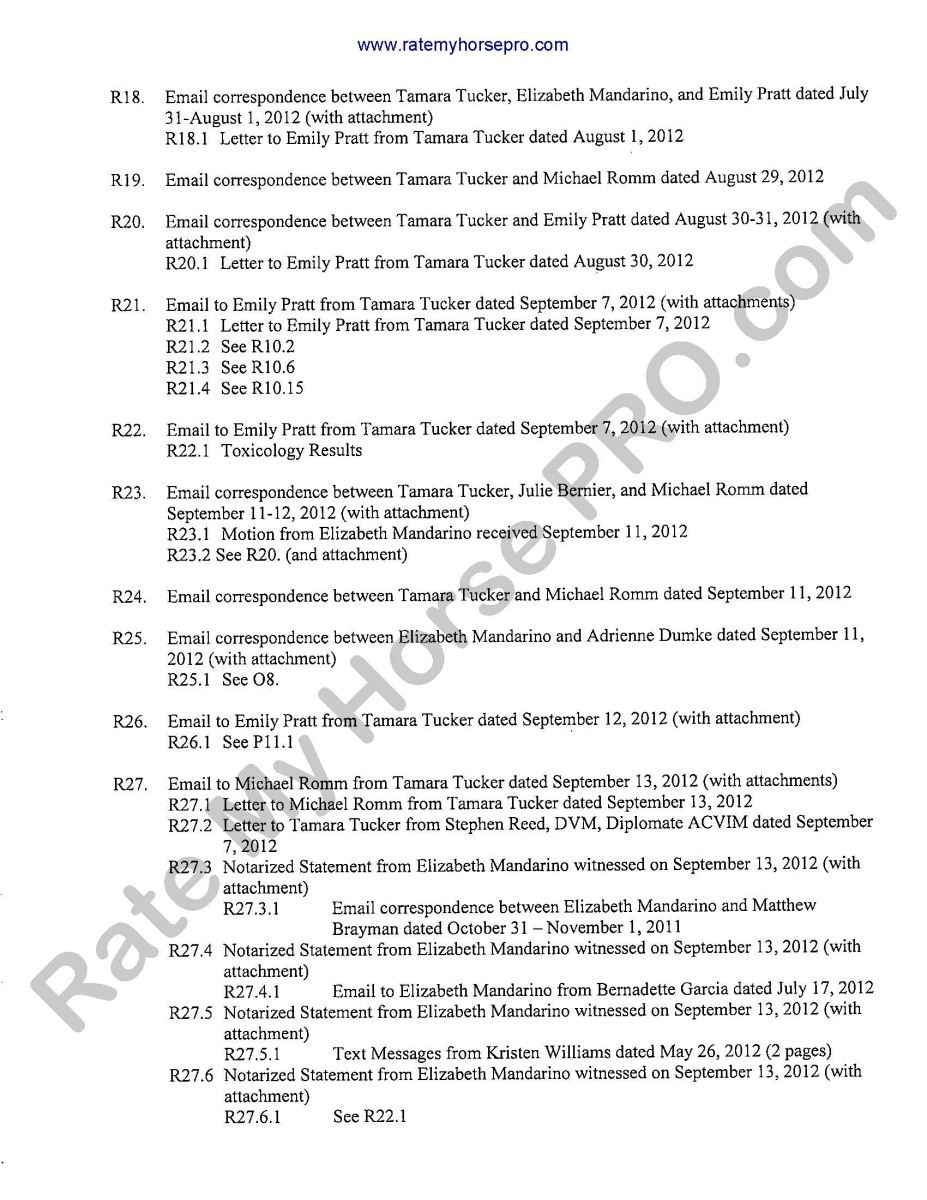 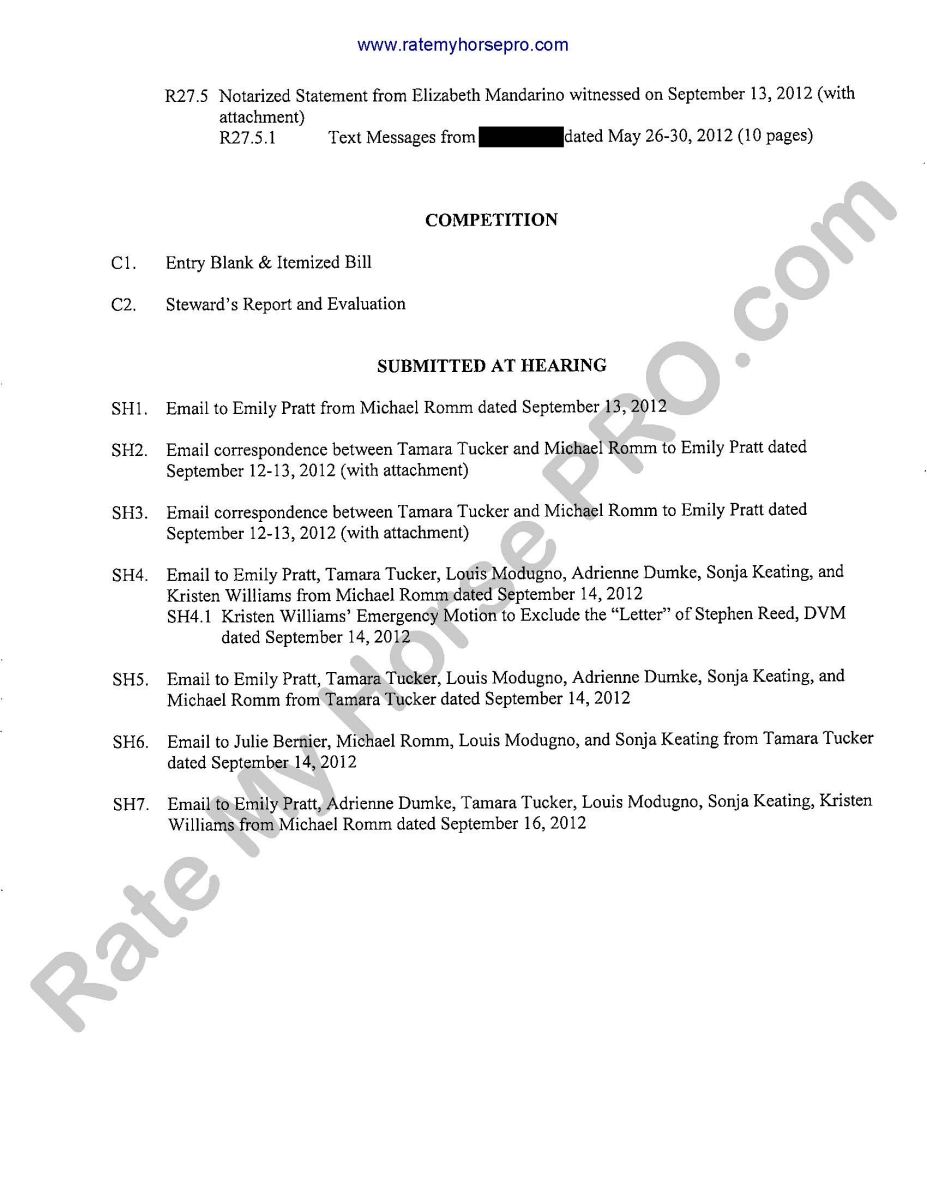 A new rule taking effect next month means no horse or pony competing at United States Equestrian Federation shows can be injected 12-hours prior to stepping foot into the ring....
Read More

The panel’s report states there was a “lack of substantiation” as Elizabeth Mandarino of Amber Hill Farm would not produce "the full necropsy report" to the protest's proponents. She did turn over “only portions of t...
Read More

The Pennsylvania State Police confirm there is a criminal investigation into the death of trainer Elizabeth Mandarino's show pony named Humble. The chestnut pony died at the Devon Horse Show....
Read More

The United States Equestrian Federation is standing firm in its decision to maintain Elizabeth Mandarino’s suspension after her pony, Humble, died at the Devon Horse Show. The Amber Hill Farm owner admitted to police that ...
Read More