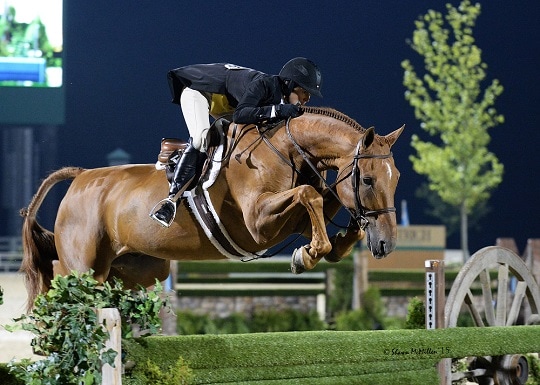 by Leah Oliveto
On a night dedicated to the horse, two special athletes were recognized for their excellence in 2015 during the USEF’s Year-End Awards Gala. In a year that witnessed equestrian athletes excel, PVF Peace of Mind and Brunello reached the pinnacle of their sports and were named International and National Horse of the Year, respectively.
International Horse of the Year
PVF Peace of Mind (Statesman Signature x JPR Have Mercy/Saddleback Sky Pilot)
2007 Morgan mare
Owner: Suzy Stafford
Photo by Jennifer Manderscheid
PVF Peace of Mind, the charismatic eight-year-old Morgan mare, reached unbelievable heights in 2015 and has proven to be 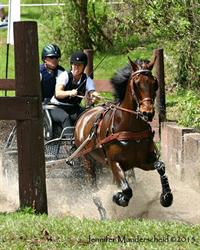 unbeatable with owner Suzy Stafford. In the carriage, an astonishing feat of competitive excellence, “Hunny” won in each of her three FEI combined driving events this year.
Included were the CAI2* Hermitage Classic in Goshen, Kentucky, the prestigious CAI2* Kentucky Classic in Lexington, and a second consecutive win at the CAI2* Live Oak International in Ocala, Florida. Most importantly, Hunny’s dominating performance in all three phases of competition at Hermitage earned her and Stafford the 2015 USEF Single Horse Driving National Championship by an incredible 14-point margin over their closest rival.
Hunny was also undefeated in the dressage arena with her owner. Demonstrating her versatility under saddle, Hunny was crowned First Level Show Champion at the popular Massachusetts Morgan Horse Show this summer.
National Horse of the Year
Brunello (Breeding Unknown)
1998 Hanoverian gelding
Owners: Janet Peterson and Liza Boyd
Janet Peterson and Liza Boyd’s Brunello turns heads in the hunter ring with his signature style and consistent top placings.
With Boyd in the tack, the pair has been a fixture in International Hunter Derby competitions since the program’s inception and scored their biggest victory in August. They won their third consecutive USHJA International Hunter Derby Championship in Lexington, Kentucky. The pair won both the Classic Hunter Round and the Section A Handy Hunter Round on their way to securing this unprecedented victory.
Voting was open to the public in January and both horses, already fan favorites, were rewarded for their tremendous results throughout 2015 with support from voters.