USEF’s Hearing Committee dismissed a protest filed against horse trainer Elizabeth Mandarino. It was filed in response to her giving her pony Humble an injection prior to the gelding’s death earlier this year at the Devon Horse Show.

The panel’s report states there was a “lack of substantiation” as Mandarino would not produce “the full necropsy report” to the protest’s proponents. She did turn over “only portions of the toxicology report.” It continues “this is a very serious matter that requires careful deliberation in the context of competent veterinary and/or toxicological expert testimony.”

The protest alleged six USEF rules were broken. They focused on unsportsmanlike conduct and violating the spirit of the rules. The allegations are not mentioned in the panel’s decision, so it is unknown if they were considered.

The protester says USEF employees assisted her in designating the rules potentially broken. Since she was new to the process, they also told her what evidence she needed in order to establish a pattern of behavior.

One of the allegations included is that Mandarino, as the trainer, was responsible and accountable for the condition of the pony. Rule GR404.2a Responsibility and Accountability of Trainers states:

“Trainers in the absence of substantial evidence to the contrary are responsible and accountable under the penalty provisions of these rules: a. for the condition of a horse or pony at a Licensed Competition (whether or not they have signed an entry blank)”

The Amber Hill Farm owner leased Humble to a child for the competition. The 12-year-old was scheduled to show the gelding at 8 AM in the hack. According to sources, the pony was dead by 6:10 AM, within minutes of Mandarino administering the injection. She says she gave the small pony “a joint treatment.”

Rate My Horse PRO was the first to obtain Mandarino’s medication list, which was posted at the show. It identifies instructions to inject Humble throughout the week with several medications, including dexamethasone and depo. It is unclear if she gave depo medrol or depo provera, but the protest alleges Mandarino violated rule GR404.4:

According to USEF rules, if she was giving dexamethasone and depo medrol, which are both corticosteroids, a medication report should have been filed with the horse show office. It would have verified that the drugs were approved for therapeutic purposes. A medication report was never produced by Mandarino during the protest process, according to an involved party. 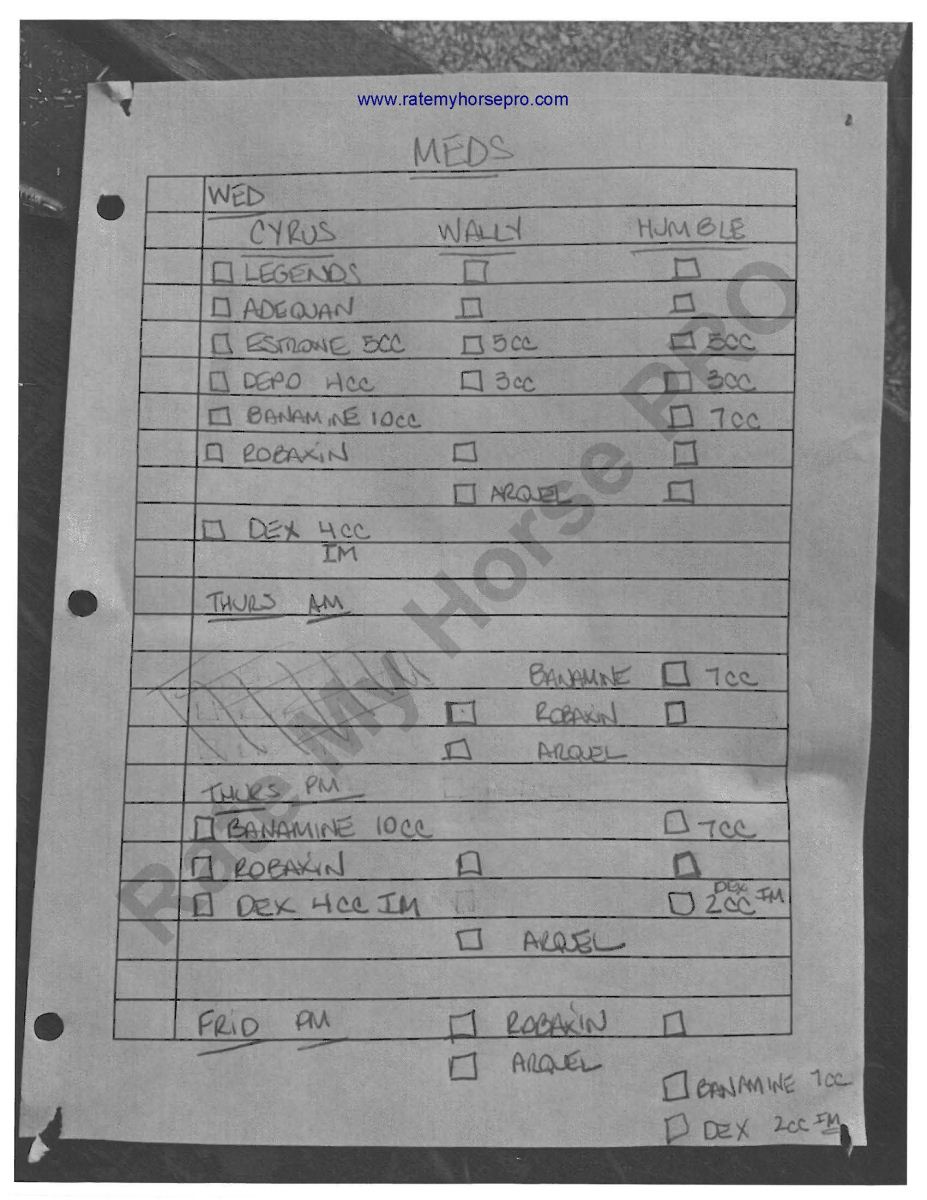 It is unclear if the Hearing Committee lost sight of what was being protested, however, Tamara Tucker, Mandarino’s attorney says, “we are pleased that the USEF Hearing Panel has dismissed the protest against Elizabeth Mandarino relating to the death of … [the] pony “Humble” at the Devon Horse Show.”

USEF does not have a policy for horses dying or those that are put down at rated horse shows, despite the organization’s claims to have equine athletes’ welfare as a top priority.

The Fédération Equestre Internationale (FEI) enacted a new rule in 2012 for horses put down at FEI horse shows. It requires a full post-mortem be performed and forwarded to the FEI’s Veterinary Department for review.

A new rule taking effect next month means no horse or pony competing at United States Equestrian Federation shows can be injected 12-hours prior to stepping foot into the ring....
Read More

The Pennsylvania State Police confirm there is a criminal investigation into the death of trainer Elizabeth Mandarino's show pony named Humble. The chestnut pony died at the Devon Horse Show....
Read More

The United States Equestrian Federation is standing firm in its decision to maintain Elizabeth Mandarino’s suspension after her pony, Humble, died at the Devon Horse Show. The Amber Hill Farm owner admitted to police that ...
Read More