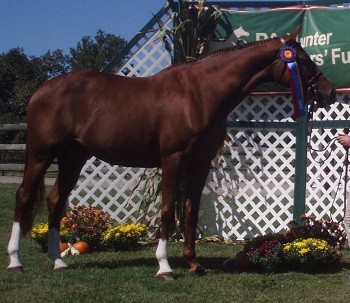 Virginia hunter jumper trainers Keg Berlin and Josh Cardine were convicted of fraud in 2004 and served time in federal prison. The mare Grande Impression is pictured.

Virginia hunter jumper trainers Keg Berlin and Josh Cardine were convicted of fraud in 2004 and served time in federal prison. The pair gained their notoriety after the FBI helped build a landmark federal case that led to their convictions.

Following suit, the USEF initiated a five-year ban on both men in 2006. In November, Berlin and Cardine will have the opportunity to apply for reinstatement with the association. The USEF resolution states both may “apply to the Federation to be removed from the ban based upon affirmative proof of total rehabilitation, including proof that [they have] truly accepted responsibility for [their] actions and taken steps to reform… [and] performed community service to benefit the welfare of horses.”

If the USEF holds firm to the resolution, Berlin and Cardine stand little chance of reinstatement. Victims report that no apology, or attempt of an apology, has ever been made. Victims also report that restitution remains mostly unpaid, and the ordered payment schedule has rarely been satisfied.

Further separating the men from reinstatement is evidence that they lied under oath during the sentencing phase of their trial. While charges were never filed for perjury, a horse the men denied having was seized by the FBI in 2005.

Grande Impression was shown by Berlin and Cardine in the International Hunter Futurity under forged papers and later leased to a rider in Virginia. Grande Impression was recovered by victim Joan Watt when she repurchased her from the ownership of the Federal Courts. Watt says, “There is simply no justification to reinstate their membership. There is no place for them in the USEF.”

The USEF resolution, however, may hold little weight as the victims will not be allowed to offer testimony. Victims and Rate My Horse PRO have inquired with the USEF for hearing details. The USEF has responded saying the proceedings are private and confidential.