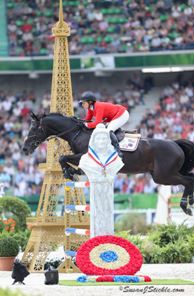 by Helen Murray
The Hermès U.S. Show Jumping Team entered the d’Ornano Stadium for the final round of the FEI World Team Jumping Championships, held as part of the 2014 Alltech FEI World Equestrian Games, determined to earn a podium finish for the United States, and they did just that, securing the Bronze medal. On a day when luck often eluded the Americans over Frédéric Cottier’s 13-obstacle track, the team of world-class riders, book-ended by two championship stalwarts, persevered to finish on total of 16.72.
The Netherlands captured Team Gold on a score of 12.83, with the French Team edging the U.S.out of Silver by just over two points on 14.08.
Led by Chef d’Equipe Robert Ridland, the resilient squad composed of McLain Ward, Kent Farrington, Lucy Davis, and Beezie Madden came into the World Championships highly regarded and did not disappoint with supreme efforts over the three rounds of the Team competition.
“A medal is what we came here for,” said Ridland of the U.S. mentality heading into the week. “This is one of the best teams we’ve ever fielded and it was great sport.”
Once again, Ward (Brewster, N.Y.) and Sagamore Farm’s Rothchild served as the pathfinders for the U.S., entering the d’Ornano Stadium looking to set the tone for the Americans with a clear round. However, it was not meant to be when the 13-year-old Warmblood gelding barely touched the oxer at fence two, resulting in the rail coming down and four faults.
“It was rider error, a small error, but the horse jumped the rest of the course well; he’s super careful. I just have to keep his shape. I’m not disappointed with the horse at all,” said the Olympic and World Championship veteran who believes this year’s Championship team is the best the U.S. has fielded in a years. “It think it’s as good a team we’ve had in the last 15-to-20 years; great riders and great horses.”
Farrington (Wellington, Fla.), a Team Gold medalist from the 2011 Pan American Games, and Amalaya Investments’ 12-year-old KWPN gelding, Voyeur, also experienced some misfortune, faulting at fence 10. The pair had an otherwise impeccable ride in a stylish effort.
“Anytime you come to an event like this and you walk away with a medal, you have to see that as success. It comes down to the top five teams are all within a rail, and to have a medal is still better than finishing fifth. It was very close there at the end, and that’s the level of the competition today and how strong the other teams are,” said Farrington.
Davis (Los Angeles, Calif.) and Old Oak Farm’s Barron looked on form to put a faultless effort forward for the U.S. on Thursday afternoon, but an unfortunate pole down at fence 12 meant they would collect four faults. This week’s competition in France was the World Championship debut for the 21-year-old Stanford student, who enjoyed the pressure of the World Equestrian Games and learned a lot from her veteran teammates.
“We were just a little unlucky this week. The U.S. riders have been a little unlucky this week,” said Davis. “We like this pressure, we like this type of competition. I’m very lucky to be on a team that’s been so supportive.”
Madden (Cazenovia, N.Y.) entered d’Ornano Stadium as the second-to-last competitor of the day, knowing that if she could post a clear round the U.S. would clinch the Bronze medal by one-tenth of a point. The 2006 FEI World Equestrian Games Team and Individual Silver medalist and Abigail Wexner’s 12-year-old Cortes ‘C’ jumped their third fault-free round of the week to secure a podium finish for the Americans.
“My horse was fantastic today. I had a couple light ticks but they all stayed up; it was a great team effort,” said Madden, who was heading down the ramp when she received the information that if she jumped clear the U.S. would earn Bronze. “I didn’t have a chance to get nervous; I just liked hearing that we had a chance for a medal.”
Not only did Madden’s clear round clinch the Team Bronze medal for the U.S., but it also moved her and Cortes ‘C’ to the top of the Individual standings on a score of 0.16. After three rounds of competition, Ward stands 14th on 6.56, with Farrington 27th on a score of 10 and Davis closed out her World Championship debut in 39th place on 14.21.
Sweden’s Rolf-Goran Bengtsson and Casall Ask stand second individually on 0.34 faults, with Soren Pedersen and Tailormade Esperananza de Rebel of Denmark third on 3.49, and France’s Patrice Delaveau and Orient Express HDC fourth on 4.08. 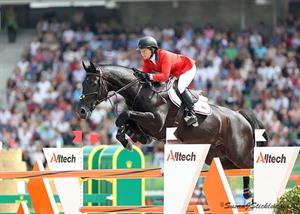 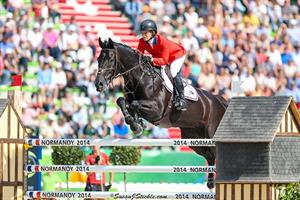 On a day where Frédéric Cottier's 13-obstacle track caused a great shake-up of the leader board, the Hermès U.S. Show Jumping Team climbed one place in the standings to head into Thursday's final team round in second-plac...
Read More