Clear rounds were the order of the day in the First Individual Qualifier for Jumping in the main arena at Greenwich Park. Out of 75 starters in the Olympic Show Jumping Competition, 32 jumped clear rounds. Two belonged to American riders Rich Fellers and McLain Ward. Reed Kessler added just one time fault at her first Olympic Games, meaning the USA heads to the Team Competition with a strong start. Team Competition begins Sunday, August 5.

Chef d’Equipe George Morris commandeered another solid effort out of his squad, he retires from this role at the end of the year.

Ward proved he is back on form after shattering his kneecap in January. He rode Antares F to a textbook clear over Bob Ellis’ track to start the US’s effort off right. The 12-year-old Baden Wurtenburger gelding, owned by Grant Road Partners, made light work of the track. Always stylish, the nearly white gelding remained beautifully rideable between the fences for Ward. Ward won Team Gold twice with the mighty Sapphire (at the 2004 and 2008 Olympic Games) jumping in the first spot on the team. He has no problem leading off the American effort.

“This is George’s team and Beezie and I have bookened it for years,” said Ward. “I like to go early. It doesn’t bother me.”

It has been a team effort to get Ward back to the top of his game since the injury, and he takes his responsibility to his support crew seriously.

“We want to do well for our country and for all the people behind us,” said Ward. “There is always a lot of pressure.”

“Especially for Beezie (Madden) and I, we’ve had a great decade with George and I think we’d like to finish with a medal for him,” he said.

The team’s second clear was jumped by the diminutive Irish Sport Horse stallion Flexible with Rich Fellers on board. Unorthodox in his approach, Flexible attacked the course with the same enthusiasm with which he claimed the 2012 Rolex / FEI World Cup Final title in April. Never in danger of having a rail, Flexible has a radar for the fences. 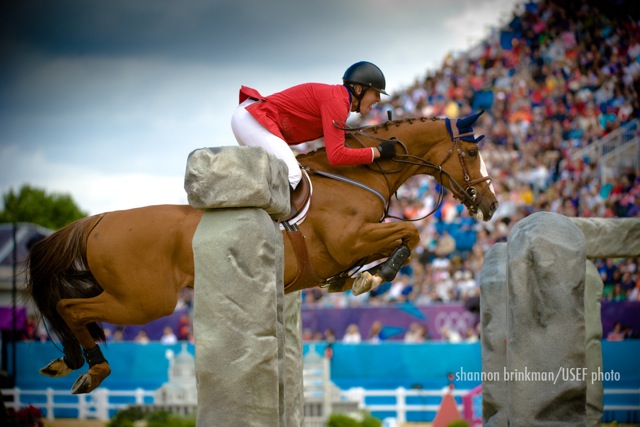 “It was great,” said Fellers. “It was a nice feeling to just get going because we’ve been preparing for this for a long time. Everything is just absolutely first class.”

Owned by Harry and Mollie Chapman, the 16-year-old veteran has been on an incredible winning streak. Fellers said he still feels as good as he did when that streak started in April.

“He felt good, he was a little bit on the fresh side but I prefer that for a long week,” said Fellers.

The youngest rider in the history of the US Equestrian Team wasn’t far off the pace of the two veterans. Reed Kessler and Cylana soared to a clean jumping effort but added one second on the clock. Kessler frequently refers to Cylana as an overscoped equitation horse and she looked the part today with an immaculate jumping effort.

“I was excited,” said Kessler. “I was just excited to go in the stadium, it has been a long six months leading up to this moment.”

Kessler won the USEF National Show Jumping Championship in March, which also served as the USEF Selection Trial for these Games. It was that effort which brought Kessler into the national spotlight – and she hasn’t let the level of her intensity waver.

“When there’s tens of thousands of people here and I’m wearing this red coat there is no room for error,” said Kessler

The surprise of the day came in the form of Coral Reef Ranch’s Via Volo who was jumping so big and so hard that she jumped herself into a significant amount of trouble at 9a, the first part of the second of three double combinations. The 14-year-old Belgian Warmblood mare stopped twice with Beezie Madden cutting their time in the ring short.

“She was jumping amazing and I planned to do the steady eight (strides) there,” said Madden. “In hindsight, the way she was going I could have done seven. We just jumped one out there (in the warm-up) and she was fine. Tomorrow I think she’ll be fine. She just went so far left and landed so dead I was heading for the standards.”

Madden said that sometimes she loses Via Volo’s rideablity, but that this was a unique circumstance for the little mare.

“She hasn’t shown a lot this year, we schooled her a little to come here but she was very impressed with the place,” said Madden. “She’s never done anything like that before.”

Madden echoed Ward’s sentiments, even though she is disappointed to not be in the running for an Individual medal, since she won Bronze in 2008.

“We are here to defend our Team Gold,” said Madden.

Today’s scores do not count for the scores in the Nations Cup tomorrow other than to determine the order of draw for the teams. Everyone starts the Nations Cup on a score of zero. Following the two days of Nations Cup jumping the top 35 placed horses go forward to the Individual final where they all start on a score of zero. Only three riders from any one team can go forward. Madden’s score to carry forward individually is the highest score after this class plus 20 for a total of 42.