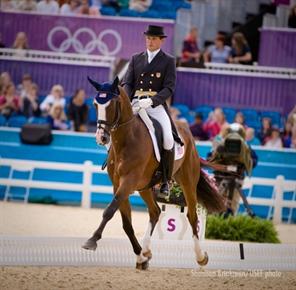 Boyd Martin and Otis Barbotiere were the first to start the Olympic Equestrian Events. All photos by: Shannon Brinkman

The first day of Eventing Dressage at the 2012 Olympic Games featured three of the five American horses. Boyd Martin was the first rider in the ring on Otis Barbotiere and made the most of his first Olympic experience, having the best test of the horse’s career so far. The venue is stunning and although the arena proved full of atmosphere, the three U.S. combinations handled the occasion admirably.

Judged by the Ground Jury of Anne-Mette Binder, Nick Burton and Gillian Rolton, Martin felt that their score of 50.7 did not necessarily reflect how much progress the Otis Barbotiere Syndicate’s 9-year-old Selle Francais gelding has made in the last year.

“It was a better test than he did at Kentucky, I could have done better changes at the end,” said Martin. “I managed to get him a bit steadier… I’ve got a lot of confidence in this horse, I haven’t had him a long time. He’s all class. I haven’t had him for a long time but I have a lot of confidence in this horse. He’s a confident horse and a brave horse.”

Brave horses were the order of the day, as only the ones that went in confidently could handle the atmosphere of such an impressive venue.

Karen O’Connor, riding in her fifth Olympic Games, nearly lost the best of Mr. Medicott when she came down the centerline for the first time. The 14-year-old Irish Sport Horse, owned by the Mr. Medicott Syndicate, rallied back and climbed up the leaderboard to finish ninth at the halfway point. Mr. Medicott excelled in the canter work and lateral work.

“I think I had it except for the centerlines,” said O’Connor after Mr. Medicott zoomed down the final centerline.

O’Connor swapped her snaffle for a double bridle this morning, a change that gave her more control over the big powerful horse. They scored 48.2 for their effort.

“It gave me a little bit more leverage to keep pushing, which is what saved me in there,” said O’Connor. “He was perfectly light and right where I wanted him to be (when I went in) and then something caught him out of the back of his eye.”

Mr. Medicott was formerly ridden by Frank Ostholt, and together they represented Germany at the 2008 Olympic Games. O’Connor has worked hard to form a partnership with the scopey chestnut over the past six months. She’s looking forward to putting that to the test on Monday’s cross country.

“I had to make him my own ride and that has been a journey for me and Mr. Medicott over the last six months and we’ve built a real partnership. I’m really excited about the cross country,” said O’Connor.

Rounding out the American effort on day one is Tiana Coudray, who rode Jatial Inc.’s flashy grey 11-year-old Irish Sport Horse Ringwood Magister. A partnership of seven years was on display in Coudray’s first Olympic Games, and despite a few mistakes, she was pleased with the effort overall. They scored 52. Coudray was pleased with how rideable he was in the ring and is still slightly overwhelmed by the occasion

“It’s one of those things you dream about as a little kid,” said Coudray. “But you think that’s never going to happen and then I got this horse and I thought hey if everything went perfect in seven years I could be there. But there’s so many things that can happen and I’m still kind of in shock that we’re here.”

The Germans have a stranglehold on the lead, with Ingrid Klimke and Dirk Schrade picking up the only two scores under 40. Riding Butts Abraxxas and King Artus to scores of 39.3 and 39.8 respectively, they are just clear of Mary King, the highly popular British rider on Imperial Cavalier.

The competition continues tomorrow with Will Coleman at 11:20 for the USA on Jim Wildasin’s Twizzel and Phillip Dutton rides in the anchor spot on Jim and Arden Wildasin’s Mystery Whisper at 2:28.