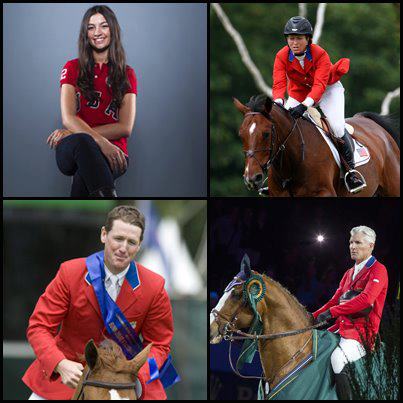 The USEF will field three full teams in the disciplines of Dressage, Eventing, and Jumping. These teams are comprised of a mix of veterans and rookies, men and women from across the country with 17 Olympic Games between them.

The youngest equestrian athlete to ever represent the United States is showjumping sensation Reed Kessler – who just turned 18. Kessler will ride Cylana, the horse with which she won the 2012 USEF Selection Trials. She rides on the team with Beezie Madden and McLain Ward who together have been members of the last two Gold medal winning Olympic Jumping Teams. Rich Fellers, the reigning Rolex/FEI World Cup Champion, rounds out the quartet on the striking 16-year-old veteran Flexible.

Phillip Dutton will be contesting his fifth Olympic Games. He first represented his native Australia, winning back-to-back Team Gold medals in 1996 and 2000. He rode again for the land down under in 2004 before changing nationalities and representing the country in which he has lived since 1991 at the 2008 Games. He hasn’t missed a World or Olympic Games since 1994. Dutton rides another Aussie import called Mystery Whisper.

Boyd Martin, arrived from Australia in 2006, the child of two winter Olympians – he rebounded from a horrific year in 2011 in which he lost his barn and 7 horses in a barn fire. His mount, Otis Barbotiere, was one of the horses that survived that devastating event.

Steffen Peters was fourth individually at the 2008 Olympic Games on Ravel, who was then an unknown entity. Four years, two World Championship Bronze medals, and a Rolex/FEI World Cup title later – Peters will try to add to those accolades with the Four Winds Farm’s legend.

Peters’ will ride alongside one of his teammates from the 2010 Alltech FEI World Equestrian Games, Tina Konyot. She returns to the U.S. Team with Calecto V, a Danish Warmblood stallion co-owned by Konyot and John Byrialsen. This pair won the 2010 USEF National Grand Prix Dressage Championship and finished runners-up this year (and last) behind Peters and Ravel and Legolas 92 respectively.

1. Rafalca and Twizzel are by the same sire, Hanoverian stallion Argentinus. Twizzel is out of an Australian Thoroughbred mare, hence is nicknamed ‘Ossi’.
2. Mr. Medicott and Flexible are by the same sire, Irish Sport Horse Cruising. Both are bright chestnuts with big blazes but there is more than a hand different in their height.
3. There are only TWO grey horses: Ringwood Magister and Antares F who is nearly white.
4. Mystery Whisper was produced to the CCI4* level in Australia by Heath Ryan. Dutton won Olympic Team Gold in 1996 with Heath’s brother Matt.
5. Ravel has his own wine, made from grapes grown in his owners’ vineyard.
6. Neither Cylana nor Kessler had shown above 1.45m, when Kessler got the mare last year, but they have made the move to prime time with ease.
7. Beezie Madden and McLain Ward were in the same jump-off for Individual Bronze at the 2008 Olympics, they found a shortcut on course through the decorations that proved to be the winning route for Madden. Ward had the very last fence down.
8. Madden is a die-hard Green Bay Packers fan.
9. Tina Konyot’s family was in the circus, her father was a renowned horse trainer, and her mother was known as “Queen of the High Wire.”
10. Coral Reef Via Volo is the smallest horse on the team at 15.2 hands, while Ravel is the biggest at over 17 hands.