An investigation reveals allegations of horse abuse at ThorSport Farm in Tennessee. Photo by The HSUS

Update August 26, 2015
ThorSport Farm says the horse abuse allegations against them are broadly misleading and contain false information, in a statement released late Tuesday.
It comes after an undercover investigation shows those in the big lick industry are still crippling their horses in the name of sport, according to The Humane Society of the United States (HSUS). The group states the trainers, owners, and grooms at ThorSport Farm, located in Murfreesboro, are complicit in the soring abuse.
Soring is the illegal act of applying caustic substances to horses’ legs or the insertion of hard, foreign objects between their hooves and thick shoes. The investigation found that of the 63 wrapping samples taken from the horses’ legs 100% tested positive for prohibited substances, including salicylic acid and mustard oil. Additional samples are still being tested.
Joe Hall of Hall Strategies, a public relations firm, represents ThorSport Farm’s interests and tells us they have not had any samples independently tested.
Painful groans are heard from one horse seen in the video as caustic chemicals allegedly bake into the horse’s skin. “Many of the horses desperately chewed at their leg wrappings but could not manage to remove them because of the duct tape used to bind the wrappings to their legs,” said Keith Dane VP of Equine Protection for The HSUS.
The unnatural Big Lick gait is created from the horse’s agony. The inflammation process causes local pain around the pastern and in the 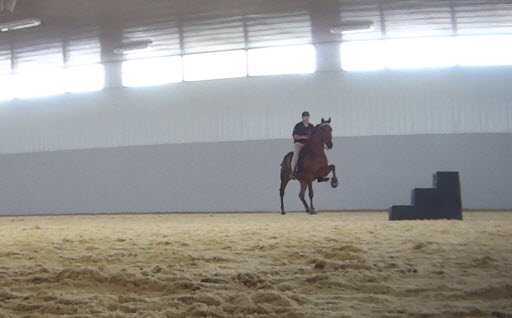 hoof since there is no room for any swelling, according to Dr. Michael Blackwell, DVM. “They [the horses] try to get off the hoof off the ground as quickly as they can just to have to repeat it again and again. Through time they learn to compensate – shift weight off the front feet.”
“In ‘The Big Lick Industry’ lameness is being celebrated. As a Tennessee veterinarian I find it embarrassing, not something to be celebrated,” Dr. Blackwell said. “There is no doubt what is going on at that facility.”
ThorSport Farm owner, Duke Thorson, knows about the soring, according to his wife, Rhonda Thorson. She calls the chemical storage room “the scary place” and told the investigator, “he’s afraid. He know’s it’s here. He’s dealing with it, but on his own time.”
Rhonda Thorson has been cited once for a violation of the Horse Protection Act since 2011. Her daughter, Allison Thorson, has at least four HPA violations during that same time.
Duke Thorson is the owner of ThorWorks Industries, Inc. and ThorSport Racing, a NASCAR truck racing team.
Thorson is on the Board of Directors for the Walking Horse Owners Association, the Performance Show Horse Association, and the Tennessee Walking Show Horse Organization. He is also on the Horsemen’s Leadership Council. Rate My Horse PRO attempted to reach Duke Thorson early Tuesday, but we did not receive a call back.
As of early this month, three horse trainers work for the Thorsons. All have HPA violations on their records. Robert Cortner has at least 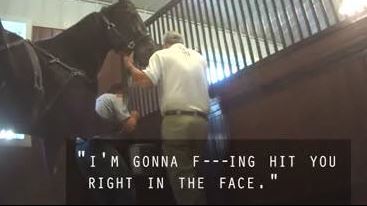 three violations since 2011; Joseph “Aaron” Self has at least six violations since 2010; and Chad Williams has four since 2010.
ThorSport Farm contends none of its trainers has ever had enforcement action against them for violating the HPA.
The farm is scheduled to be at The Tennessee Walking Horse National Celebration when it begins on Wednesday with the horses seen in the video.
“ThorSport Farm has a well-earned reputation for operating ethically and legally, and we emphatically reject the HSUS’s charges of soring,” says owner Duke Thorson in a prepared statement. “This farm operates within the rules. Our intolerance for unethical and illegal training is widely known to the point that people who want such an advantage no longer approach us. ThorSport Farm continues to work vigorously to end abuse and clean up the industry.”
Political donations may tell a different story. The Prevent All Soring Tactics Act (H.R. 3268/S. 1121) is before Congress, which would bolster the Horse Protection Act of 1970. The PAST ACT would end the industry’s self-regulation and ban the stacks and chains that are an integral part of the soring process, while strengthening penalties for violations of the law.
Duke Thorson’s 2014 political donations went to Senators Lamar Alexander, R-TN and his wife, Rhonda Thorson, contributed to Mitch McConnell, R-KY. Neither are PAST ACT supporters.
The evidence obtained from ThorSport Farm has been turned over to Rutherford County Sheriff’s Office. No action has been taken to date.
click play to view undercover video