Sitting water becomes a breeding ground for mosquitoes that cause diseases like EEE.

Two horses are dead after contracting Eastern Equine Encephalomyelitis, according to North Carolina veterinary officials. Both horses were unvaccinated.
An 18-month Paint from Carteret County and a 3-year-old Quarter Horse from Bladen County began exhibiting symptoms including generalized weakness, stumbling, depression and inability to stand or eat. The Carteret County horse was euthanized on July 21st and the Bladen County horse died August 2nd.
“If your horses exhibit any symptoms of EEE, contact your veterinarian immediately,” said State Veterinarian David Marshall. “Several serious contagious diseases, such as West Nile virus, equine herpes virus and rabies, have similar symptoms and should be ruled out.”
EEE causes inflammation or swelling of the brain and spinal cord. It is usually fatal.
Symptoms include impaired vision, aimless wandering, head pressing, circling, inability to swallow, irregular staggering gait, paralysis, convulsions and death. Once a horse has been bitten by an infected mosquito, it may take three to ten days for signs of the disease to appear.
Mosquitoes can breed in any puddle that lasts for more than four days, so removing sources of standing water can reduce the chance of exposing animals to WNV or EEE. Keeping horses in stalls at night, using insect screens, mist systems, fans and turning off lights after dusk can also help reduce exposure to mosquitoes.
Dr. Marshall says he recommends that equine owners talk to their vets about an effective vaccination protocol to protect their horses from EEE and another mosquito-borne disease, West Nile virus. The vaccinations initially require two shots, 30 days apart, for horses, mules and donkeys that have no prior vaccination history. Dr. Marshall also recommends a booster shot every six months.
These are the first reported cases of EEE in horses in North Carolina in 2014, but other states, including Florida, have had reports of horses being infected. Last year, North Carolina reports 15 horses were infected with EEE. 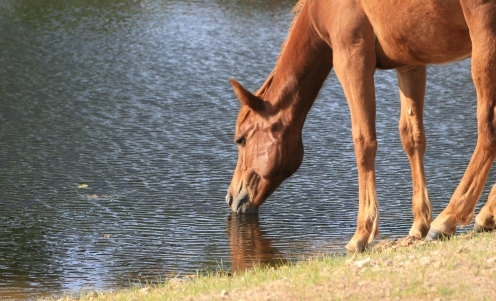 Shield Your Horse from Mosquito-Borne Diseases