The Arabian mare Mylla prior to being shipped with Parlier Trucking Company of North Carolina. WARNING: This article contains a graphic image. User discretion is advised.

A North Carolina horse transporter is accused of fraud and negligence. A Missouri lawsuit states James Parlier, Jr. was hired to haul a horse that ended up severely injured after he turned the job over to one of his drivers.

Plaintiff Tiffany Lewis is suing Parlier and his company for breach of contract.  James Timothy Ashworth, who goes by “Timmy,” is also named as a defendant.

The plaintiff hired Parlier’s company to haul an Arabian she purchased from California. The grey mare named Mylla was a Champion Halter horse in Brazil and the United States, according to the documents. 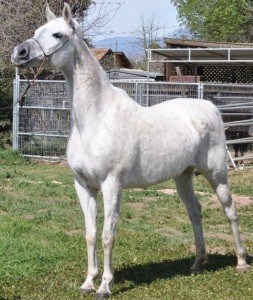 Parlier advertises his company as a professional horse transporter that has been serving the equine industry for more than 32-years. “We know horse behavior and our focus is on the careful, patient handling of your horse… Feel confident leaving your horse in our care,” Parlier’s website states.

Parlier allegedly told the plaintiff that the haul to Missouri would take a minimum of 4-to-5 days to allow for the appropriate rest off of the horse trailer. Mylla’s transport was arranged for March 11, 2013. The day before the contracted haul was to occur, Parlier allegedly informed the plaintiff he would not be personally shipping the mare. Court documents state Parlier subcontracted with or hired co-defendant Ashworth to ship the mare.

Mylla was examined by a veterinarian for her health certificate the day before she shipped. Photos show the petite mare being loaded into a single stall next to a Gypsy Vanner stallion. The trip half-way across the country spanned about 1,650 miles. It took Ashworth two days to complete.

The plaintiff’s contract with Parlier states the shipper would “use due diligence to safely transport, feed and care for [Mylla], including making arrangements for all needed rests and regular stops …” If the mare needed a veterinarian, the transporter was supposed to notify Lewis immediately. If she could not be reached, the contract states the transporter is authorized to call a veterinarian to attend to the horse’s needs.

About an hour prior to Mylla’s arrival at her final destination, Lewis says she received a call from Ashworth letting her know they were close. The conversation morphed into Ashworth allegedly telling her that the mare coliced the day before. In their prior conversions, she says there was no mention of any issues with the mare.

Mylla arrived at her new home with “numerous injuries” that needed immediate veterinary care including: a large pressure wound on her left hip that was infected and necrotic – a vet report states it “goes deep to bone”; bleeding arterial wounds to her lower right back hoof wall; a substantial injury to left back hoof wall; open lacerations and abrasions; rope burns to her back legs; and extremely high respirations, and heart rate, according to court documents.

Over the next week, the mare’s health was failing. Mylla consistently ran a fever, had an increased heart rate, and developed a cough among other issues noted in the legal complaint.

Lewis’s veterinarian referred Mylla to The College of Veterinary Medicine at Kansas State University. The grey Arabian underwent various medical treatments for almost four months due to the severity of her injuries.

Mylla was diagnosed with Pleuropneumonia or an infection of the lungs and pleural cavity. Veterinarians performed a surgical procedure called a thoracotomy to treat the illness. The surgeon opened Mylla’s chest cavity and removed dead tissue from her lungs.


The treating veterinarian attributed her condition to “prolonged head elevation resulting from riding too far in a trailer without stopping, severe stress and left side body trauma…”

Mylla’s treatment cost about $30,000. Prior to filing suit, Lewis says she attempted to resolve the matter with Parlier.

Interestingly, Lewis was served with legal papers last week. Parlier is striking back in a federal lawsuit filed in the Statesville Division of the Western District Court of North Carolina. He is suing for tortious interference with contract among other claims.

Parlier alleges Lewis and various named and unnamed individuals are conspiring to damage his reputation by “publishing false, unfair and deceptive internet postings” about him.

The additional defendants include: Kansas City Premier Apartments, Inc., a Missouri company owned by Lewis; Jason Stahl, who is believed to be a Missouri resident, but might be a fictitious internet user; Maria Bogdanova Peifer, a former Parlier customer residing in Pennsylvania; Brenda Casteen, Parlier’s “disgruntled” ex-girlfriend and a one-time customer living in West Virginia; Marilyn Meeker Bernstein, a former Parlier customer in California; and 10 “Jane Doe” or “John Does”.

According to the filing, an example of Lewis publishing false, misleading and deceptive statements is this Facebook post:

“This [is] Mylla’s story of survival. You will find documents, graphic pictures, and vet reports. It is imperative that you check out your haulers and ensure that they carry proper licensing and DOT credentials. Mylla was hauled by a company that was un-authorized to drive by the DOT. This is Mylla’s horrific story”.

The plaintiff claims as a direct result of interference by the defendants, an adverting site for horse haulers, Traveling Horse Transport & Stables Directory, terminated its agreement with Parlier. Due to the loss of that relationship alone, Parlier alleges a loss of at least $200,000 a year.

Mark Ishman of Ishman Law Firm, PC, filed the suit on the same day he wrote to the U.S. Department of Transportation (U.S. DOT) on behalf of Parlier.

The U.S. DOT notified Parlier Trucking Company in May that he was charged with six violations by the U.S. DOT including:

– Failing to implement a random controlled substance and/or an alcohol testing program.

– Operating a motor vehicle without having in effect the required minimum levels of financial responsibility coverage.

– Failing to maintain driver qualification file on each driver employed.

– Failing to require the driver to make a record of duty status.

– Failing to keep minimum records of inspection and vehicle maintenance.

Parlier received an initial notice with $12,170 in civil penalties from the DOT. Ishman states his client was not aware he was required to comply with these statutes in the operation of his business. Ishman also asked for a reduction of the fine due to his client’s “low-income financial status…”

Regarding Parlier’s wages, Ishman wrote the following to the transportation agency:

“The assessed fine of $12,170.00 is greater than Mr. Parlier’s salary that he earned in any calendar month during the past year. Mr. Parlier would be financially damaged if he were required to pay this fine as assessed. Upon request, Mr. Parlier would be delighted to submit his current, certified balance sheet or other evidence of assets and liabilities.”

A settlement agreement between Parlier and the Federal Motor Carrier Safety Administration of the DOT states FMCSA lower the civil penalty subject to Parlier’s compliance. Parlier must pay $8,736 to the agency over the next four years.

FMCSA issued Parlier an Out of Service Order that kept him from hauling from May 27th until July 8th.

Parlier is now in compliance for the first time since 2008, according to FMCSA’s Motor Carrier report. He now carries the minimum $750,000 in public liability insurance. Additionally, Parlier is the only driver for his company. He is also recording his on-duty time for each 24-hour period, according to his attorney.

Stay with us as we continue following these lawsuits. 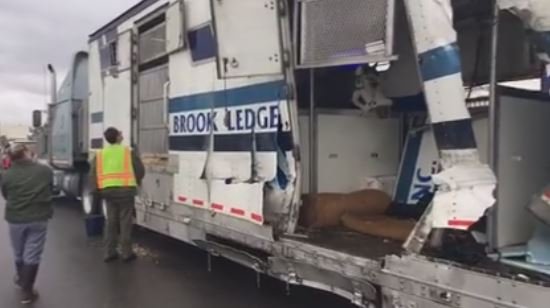 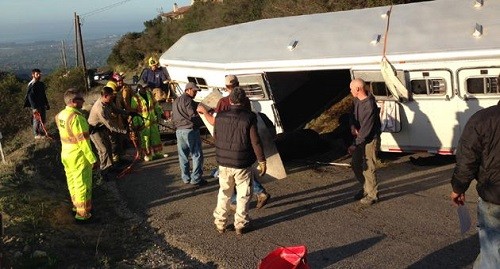