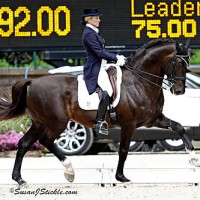 The International Dressage Riders Club (IDRC) is reportedly seeking clarification regarding the elimination of Tina Konyot and Calecto V from the 2013 World Dressage Masters Friday. The stallion is the first dressage horse eliminated from international competition under the new blood rule.

Questions remain whether the correct protocol was followed by horse show officials when they eliminated Konyot and her mount. Konyot told Dressage-News she was unaware of the blood, but if there was an injury it may have been caused when Calecto stumbled during the extended trot. A steward reported a trace of blood after their ride on the horse’s side, however no injury was found according to Konyot.

Upon review of the process and after consultation with the FEI, it has been confirmed that the current rules regarding the elimination process were followed to the letter.

Before she left the official equipment check area ringside, the rider was informed by the FEI Chief Steward that the Judge at C had made the decision based on Article 428.8 and Article 430.7.6 that the horse must be eliminated due to the evidence of fresh blood.

The pair represented the United States at the 2012 Olympics in London and at the 2010 World Equestrian Games.

Konyot finished her test and was given a score of 68.681%. The elimination was made public about two hours later.

For more go to Dressage-News.com.