A Texas judge awarded 201 horses to the Houston SPCA late Tuesday. The quarter horses were seized from Herman and Kathleen Hoffman’s Premium Star Ranch on June 24th. Both are charged with three counts each of animal cruelty.

The Houston SPCA currently has 116 of the seized horses at its facility. After eight hours of testimony from both sides, Montgomery County Justice of the Peace Wayne Mack ordered the remaining horses removed from the Hoffmans’ property in the next seven days.

Herman Hoffman represented himself and his wife during the civil proceeding. He said he has never mistreated an animal and that he believes everyone is trying to destroy his business. Hoffman and his wife also operate Calico Dairy in Conroe.

Prosecutors alleged the Hoffmans maltreated the horses by denying them food, water, shelter, and basic care.

Houston SPCA President Patricia Mercer tells Rate My Horse PRO the care of these horses presents many challenges including that an untold number of the Hoffman horses have never been handled. Complicating matters Mercer says about half of the 201 horses are stallions. “We are committed, and we are looking for offsite housing,” she says.

The Houston SPCA manages large scale rescue and disaster efforts. It’s campus holds up to 1500 rescues, but Mercer says housing cats and dogs is very different logistically than housing horses. Adding stallions into the fold adds a new level of complexity to the stabling situation.

The Hoffman case isn’t the group’s only horse seizure case. Sixty horses were previously being cared for by the Houston SPCA and the rescue organization is expecting another 15 horses from another case.

Veterinarians have been busy assessing horses. Blood has been pulled on just over half of the horses and some of the mares are pregnant. Mercer did not have an exact number. 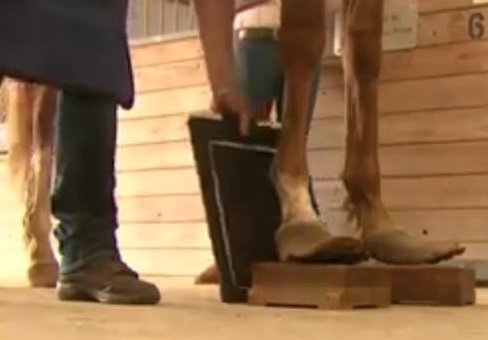 X-rays tell a disturbing story regarding the condition of the horses’ hooves and past care. “Their feet are in deplorable condition. They have had little or no farrier work,” Mercer says.

“It is an expensive undertaking and we rely on support.” Her rough estimate for a month’s care for these horses is half a million dollars.

“We want to stop their suffering, get custody, and move these horses to a life they deserve,” Mercer adds. The custody piece is in place for now, but the Hoffmans have the opportunity to appeal the judge’s decision.