Valerie nine days into her recovery at the rescue.

Three months after Horse Authority first reported that a California dressage trainer was being investigated by Sonoma County Animal Control and Care (ACC) for the alleged neglect of her horses, a charge has been filed.

“Except as otherwise provided in subdivision (a) or (c), every person who overdrives, overloads, drives when overloaded, overworks, tortures, torments, deprives of necessary sustenance, drink, or shelter, cruelly beats, mutilates, or cruelly kills any animal, or causes or procures any animal to be so overdriven, overloaded, driven when overloaded, overworked, tortured, tormented, deprived of necessary sustenance, drink, shelter, or to be cruelly beaten, mutilated, or cruelly killed; and whoever, having the charge or custody of any animal, either as owner or otherwise, subjects any animal to needless suffering, or inflicts unnecessary cruelty upon the animal, or in any manner abuses any animal, or fails to provide the animal with proper food, drink, or shelter or protection from the weather, or who drives, rides, or otherwise uses the animal when unfit for labor, is, for every such offense, guilty of a crime punishable as a misdemeanor or as a felony or alternatively punishable as a misdemeanor or a felony and by a fine of not more than twenty thousand dollars ($20,000).”

ACC’s Director confirmed previously that the agency was called to Stockebrand’s property in September 2010. Stockebrand was directed to have a veterinarian check on her horses’ conditions. Officers verified shortly after that she did follow the instructions.

This past fall, two aged mares including a bay named Valerie ended up at Lost Hearts & Souls Horse Rescue. The examining vet reported Valerie had a body condition score of 1 when the mare arrived at the rescue; she was emaciated with no body fat. She was also in cardiac distress, had a heart murmur, and was in critical condition. Three months later her body condition continues to slowly improve and she is a 3 on the scale.

Valerie when she arrived at the rescue in September. 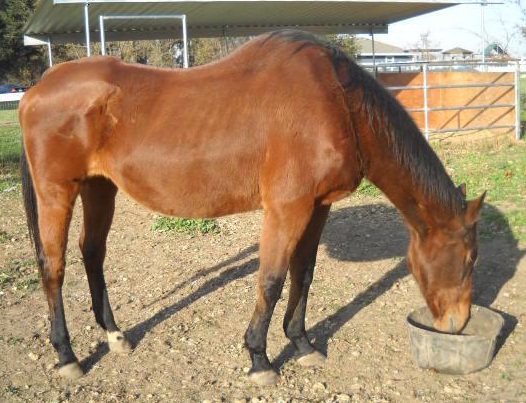 The younger black mare, Sister, was a 3 on the Henneke Body Chart when she arrived. Sadly, just weeks ago she was humanely euthanized after she started suffering from stroke like symptoms. A necropsy determined she suffered a brain bleed. 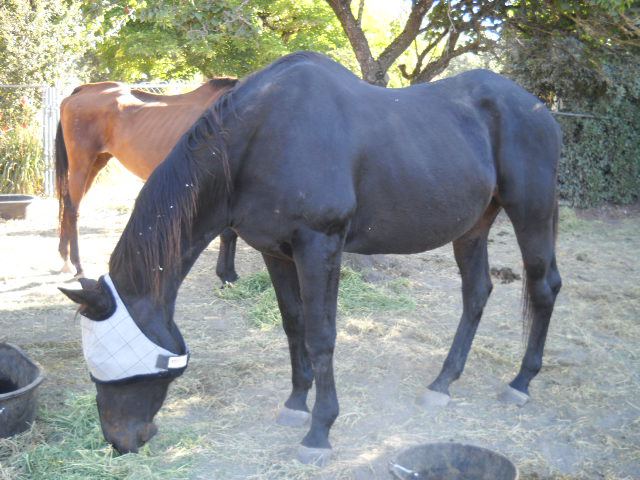 Stockebrand isn’t just any horse owner. She was selected to represent the United States in international dressage competition including the Olympics, the World Championships, and the Pan American Games in the 1980s.

More recently, Stockebrand was inducted into Sonoma County Horse Council’s 2010 Equus Hall of Fame. The organization’s website says for “her contribution to advancing the discipline of Dressage.” The site continues “she is an ambassador for all horses and horse lovers in the art of Dressage” and “she owns and houses several retired horses, but her current focus is a six year old Hanoverian named Drambuie.”

Stockebrand continues to compete in United States Dressage Federation (USDF) recognized shows. The last, according to CenterlineScores.com, was six months ago where she competed a Morgan called Indiana Darla Vuelta at the Golden Gate Arabian All Breed Dressage Show for a client.

Stockebrand will be arraigned later this month.