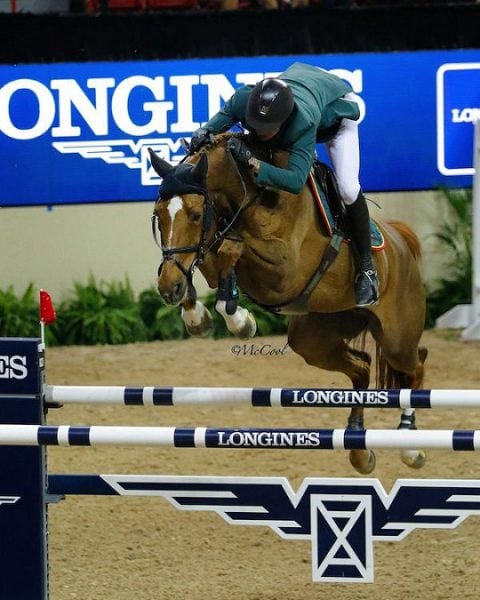 by Louise Parks
Switzerland’s Steve Guerdat was a happy man when claiming the Longines FEI World Cup™ Jumping 2015 title at the Thomas & Mack arena in Las Vegas, USA on Sunday. “I’ve been waiting a long time for this moment,” said the 32-year-old Olympic champion whose last-to-go ride was an absolute thriller.
He came into the drama-filled final competition sharing the lead with America’s Rich Fellers, but it was French rider Penelope Leprevost who lined up second at the end of the day, while 19-year-old Irish talent, Bertram Allen finished third.
“I’ve been trying a long time to win this and I’ve come close many times. It’s the third time I was in the lead going into the final competition, and today I nearly messed it up again! Coming to the last I was riding more like a cow-horse rider,” Guerdat said afterward. “I’m so happy, I feel blessed!”
With riders going in reverse order of merit, there were only six clears from a start-list of 29 over another tough course from Anthony D’Ambrosio in the first round. The vertical at fence nine claimed a number of victims, but there were plenty of faults posted later on the track, with horses beginning to fade after three days of demanding jumping.
One of the features of the 2015 Final has been the remarkable performances of the younger generation, and it was 24-year-old Douglas Lindelow from Sweden, sitting 12th with Casello, who was first to leave all the poles in place. The Netherlands’ Maikel van der Vleuten and VDL Groep Verdi immediately followed suit. And when America’s Beezie Madden (Simon) and Belgium’s Jos Verlooy (Domino), who each carried six penalty points into the last day, were also fault-free they shot up the leaderboard, while Penelope Leprevost (Vagabond de la Pomme) carrying five penalties, put the pressure on the top three when also foot-perfect.
Bertram Allen and Molly Malone were just one penalty point behind the leaders as the day began, but they began to look vulnerable when the massive 1.75m-wide oxer at fence five hit the floor. And when Guerdat jumped clear, but joint-leader Fellers had two fences down, the Swiss star went into the second round still on a clean sheet. With Leprevost and Allen now lying joint-second with five faults apiece, he had a fence in hand as the second round began. But things didn’t go quite to plan for the eventual champion this time out.
Both Leprevost and Allen faulted once more to put them on a nine-fault final total, and it seemed the Longines 2015 title must surely already be in Guerdat’s grasp. But the crowd gripped their seats and gasped when his chestnut mare, Albfuehren’s Paille, hit the first element of the double at five. And then it almost completely unraveled for the Swiss star on the turn to the last.
“I don’t really want to think about it!” he said afterward. “I didn’t expect the first mistake, those four strides (from fence 4 to 5a) turned out to be very, very long, and that triple combination wasn’t good for me at all, but once we were past that I thought now stay calm. But coming to the last I knew the time was tight. I could hear Martin Fuchs outside the arena saying “go, go!” and I don’t know what I did. I just went as fast as I could to the finish line, but unfortunately there was a big fence in the way,” he said with a laugh.
The last fence indeed hit the floor with a crash, and it was only his ferocious gallop to get through the beam inside the 68 seconds time-allowed that saved the day. If he had added a single time fault to the eight fence penalties he had just collected, would have been forced into a three-way jump-off against Leprevost and Allen. And he has endured too many unsuccessful FEI World Cup™ Final jump-offs before to make that an enticing prospect.
Leprevost’s faster time of 65.30 with Vagabond de la Pomme secured runner-up spot while Allen had to settle for third when a half-second slower.
Guerdat described his winning ride, Albfuehren’s Paille, as, “a real fighter, today a lot of horses were really struggling but every time she sees a fence she wants to jump it, no matter what.”
The victory is particularly sweet for the new champion. “I’ve been three times on the podium, twice in the jump-off and always finished in the top 10. I always wanted to win this,” Guerdat said. Talking about his determination to eventually succeed, having competed at 10 finals, he said, “I have good people around me who keep me calm and confident and keep me going. You need a little bit of luck, you have to keep believing in yourself and your horse and if you come so close so many times you deserve to win it one time!” 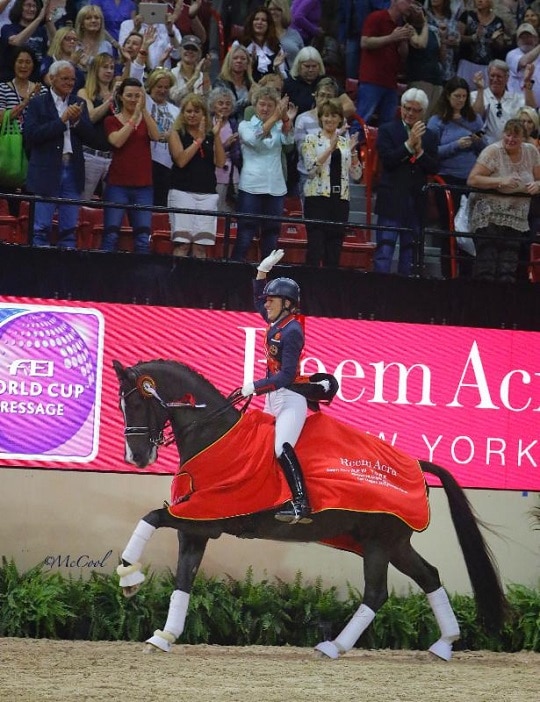 Charlotte Dujardin and Valegro Make it a Double Win