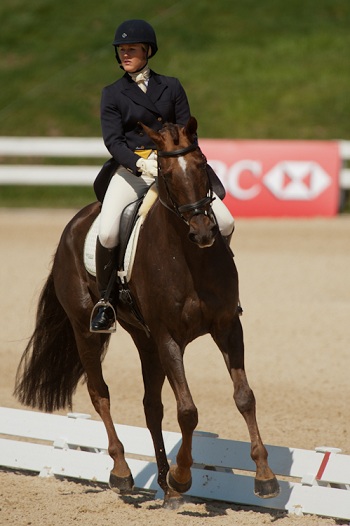 Alison Springer and Arthur are in the lead after dressage with the only sub-40 mark at the Rolex Kentucky Three-Day Event presented by Bridgestone, the third leg of the HSBC FEI Classics™. The duo can always be relied upon to produce a beautiful test at this level, but the elegant chestnut gelding also has a tendency to suffer from nerves.

Springer, a Kentucky regular, explained, “I’ve tried to bring a different attitude this year, not putting as much pressure on myself. He’s never going to be a relaxed horse, but I am working on figuring out what I need to do to keep him calm and confident. I haven’t figured it all yet but he’s a good horse and I am excited about the partnership I can have with him.”

Commenting on the Derek di Grazia designed cross country, Springer said, “It’s a tough course. Last year, I had a tremendous ride. I know what I need to do to produce my best tomorrow. Hopefully, I can make good decisions.”

Burghley winner William Fox-Pitt (GBR) has kept his Rolex Grand Slam chances alive with second place on Parklane Hawk. If he wins at Kentucky, and then at Badminton (GBR) a week later, where he has two useful rides, he will be the first rider since Pippa Funnell (GBR) in 2003 to capture the elusive $350,000 prize which goes to the rider who can triumph at the three CCI4*s consecutively.

“The HSBC FEI Classics have become a vital part of the eventing calendar and a real focus for the riders. You have to be in it to win it,” he commented.

Fox-Pitt said about his dressage test, “I am very pleased. Parklane Hawk is a fantastic horse with great ability and good focus. The test wasn’t 100% perfect and showed a few glitches he didn’t have last year. He felt the pressure of coming back in a big arena and was a bit edgy at times but, overall, he did a great job. This weekend will tell me more about his abilities. If all goes well, he could be the one for Greenwich!”

Fox-Pitt also commented on the cross-country test, “This is a clever course, very well presented. It will have a cumulative effect. By the time you jump the third-last fence, you’ll know you’ve been riding a proper CCI4*.”Clark Montgomery (USA) is next best of the home side in third place on Loughan Glen. “My horse is young and green but he’s a sweetheart and he wants to do his job. He understands the three phases of eventing and he always tries, which makes him a real competitor.”

Fifty-seven competitors from five nations have come before the ground jury of Anne-Mette Binder (DEN) and Nick Burton (GBR), both of whom will be officiating at the London Olympic Games this summer, and Michel Asseray (FRA). At the end of the first day of dressage, Boyd Martin (USA) held the lead on his long-time partner, the 16-year-old former hunter, Remington XXV, and they are still in sixth place.

“He’s a good old horse,” commented Martin affectionately. “He’s taken me all around the world now, and it was wonderful to ride a test on a horse who knows what he’s doing.”

Martin, who made his US team debut in 2010, is one of the many riders for whom Kentucky is a key Olympic selection trial. Karen O’Connor (USA), 54, a three-time winner of Kentucky, is one for whom the weekend has special significance, as she is aiming for her fifth Games and has spent the winter focusing on her personal fitness.

“This competition (Kentucky) is extremely important to me, and I owe it to myself and everybody who’s put a lot of time and effort into me to be ready for it and for whatever may be beyond,” said O’Connor, who is lying fourth on new ride Mr Medicott and ninth on Veronica. “If I don’t give it 110%, then shame on me.”