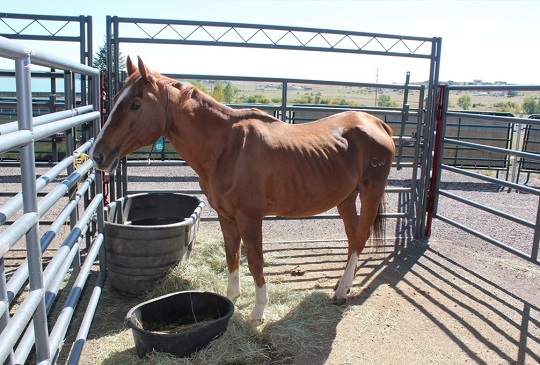 Dual Peppy after being rescued.

New photos obtained by Rate My Horse PRO show a Colorado horse breeder’s horses from September 2013 in emaciated condition.
Ten horses and four llamas owned by Sherri Brunzell were found living in a crypt containing the decomposing remains of their former stable mates last week. Rate My Horse PRO confirmed six stallions and four mares were seized by officials on Monday.
These new images capture the seriousness of the situation as it was a year ago. Lush grass is just outside the reach of the horses until a young visitor arrives. Their bones are visibly seen through their skin. It is unknown if all of the horses pictured made it out alive. 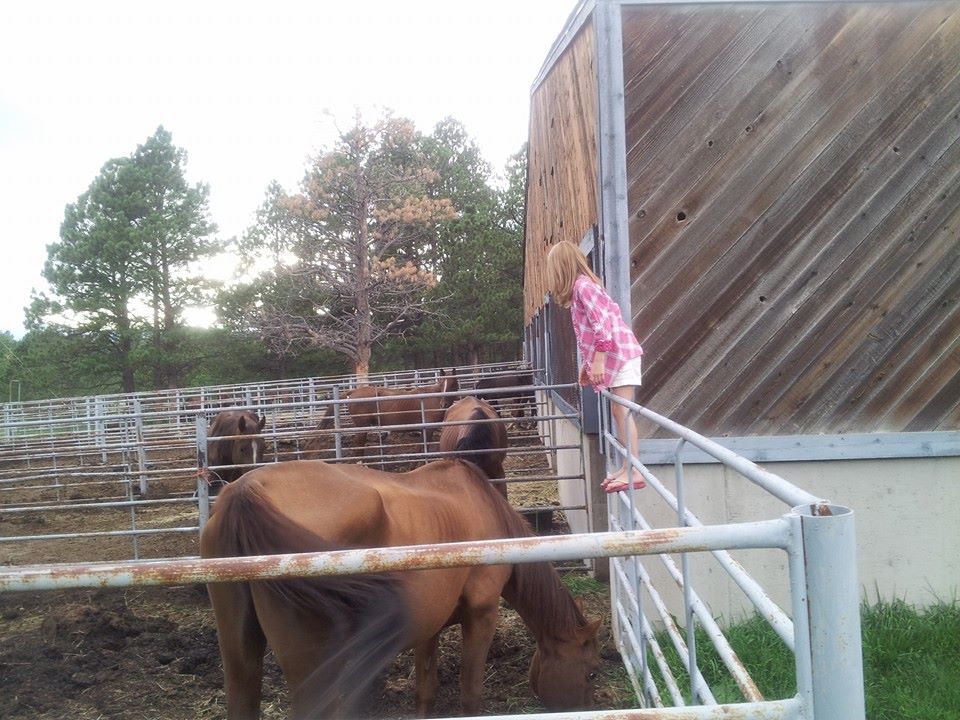 Brunzell has been cited for cruelty to animals, a class one misdemeanor. It is unclear how many counts she faces. Lt. Bob Jaworski says, “the district attorney files the official charges and this is an on-going investigation so I’m not going to comment further.”
Fourteen horses left to rot in a barn died from colic over a year and a half period, according to Brunzell. Living among the stench of death were four mares and six stallions, including the legendary cutting horse, Dual Peppy. Brunzell reportedly paid over $600,000 for Dual Peppy in 1998. The stallion earned over $88,000 in NCHA earnings and was a champion sire.

Brunzell told authorities she didn’t have the money to remove the horses’ bodies so they were covered with lye and tarps, according to the search warrant obtained by Rate My Horse PRO. The skeletal remains of thirteen horses were discovered on the interior of the

building. A green dumpster collection bag contained the skeletal remains of another.

The El Paso County Sheriff Department began its investigation last week after a neighbor stumbled upon the barn doubling as an equine ossuary. Deputies note of the ten horses “two horses were thin but not emaciated. The hooves on five of the horses were excessively long.”

While Brunzell alleges the horses died of colic, she admitted she doesn’t have a regular veterinarian due to expense and “unsatisfactory results.” Brunzell and her husband have been providing necessary care. “She felt it would be better to spend the money on feed for the horses than on veterinary bills.”

The horses’ bones could determine if they died of starvation through a bone marrow fat analysis.
The identity of the dead horses may never be known. The former crime-scene was turned back over to Brunzell who rents the property. She is responsible for any clean-up of the horses’ remains, according to Sgt. Greg White.
A veterinary evaluation done by Randy Parker, DVM two days after the authorities initially began investigating won the animals their freedom. The horses and four llamas were seized. Our multiple attempts to reach Dr. Parker have gone unanswered.
The horses have settled into the rescue facility. Now, they begin the long process of rehabilitation as the criminal case proceeds against Brunzell.
Brunzell could retain ownership of the horses if she is able to pay an estimated $6000 cost of care bond. She has 10 days to post the bond from the day of seizure or she can file a motion stating the seizure was illegal.
The American Quarter Horse Association has denied Brunzell any future membership privileges. A representative for AQHA said in a press release that Brunzell is not eligible for registration related transactions, attendance, or participation in events.
Brunzell is scheduled for court on December 31, 2014.
Our attempts to reach Brunzell by phone have been unsuccessful.