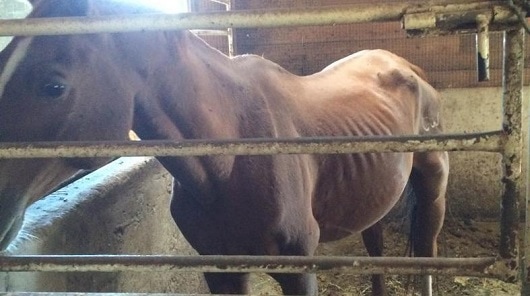 The former American Quarter Horse breeder found guilty of abusing her horses was sentenced to 60-days in jail Thursday. Sherri Brunzell, of Colorado, is banned from owning, caring for or selling horses or llamas.

It is the latest development in the saga that began almost a year ago. Ten horses and four llamas owned by Brunzell were found living in a makeshift tomb last September. It contained the decomposing remains of the animals’ 14 former stablemates.

The living, including the famous stallion Dual Peppy, were neglected and emaciated. After being seized from the Black Forest barn, the horses and llamas have been under the sheriff department’s control recovering at two rescues.

In May, Brunzell was found guilty of eight misdemeanor counts of animal cruelty and not guilty of six counts. She was not charged for the dead animals.

Judge Stephen Sletta advised Brunzell regarding her sentence, “I wish I could do more, but this is all the law will allow,” according to those in the courtroom.

Judge Sletta ordered that the eight abused horses be re-homed through adoption.

Dual Peppy’s former owner C.T. Babcock says he hopes to take the horses back to his family’s Babcock Farm in Texas. “I’m very happy about the outcome.” Babcock hasn’t been allowed to see Dual Peppy, but says he is feeling good about the situation.

The two horses that the jury found she did not abuse, along with four llamas will be sold. The judge ordered all of the horses must be transferred with their AQHA papers.

Brunzell’s attorney filed a motion for a retrial. A hearing has been scheduled for September 17th before Judge Sletta. If denied, her jail term is expected to begin.

Once Brunzell is released from jail, she will begin a five-year probation term. During that period she is banned from owning or possessing any livestock, including horses and llamas.

Babcock adds, “I am so glad they [the horses] are out of that living hell. They deserve way better.”