Cowboy was at the center of the criminal investigation into Cumberland Riding Academy and trainer Kim Smith.

No Charges brought against Kim Smith

Sgt. Sean Ryan, with the department’s Animal Control Division, was the lead investigator. He tells Rate My Horse PRO, “despite the red flags, there are certain guidelines we have to follow.”

Crucial to law enforcement’s investigation is evidence, some of which may have been lost due to a lag in the filing of complaints. “Time is of the essence in these cases,” Sgt Ryan says. “The video was taken a week prior.”

Cumberland Riding Academy’s horsemanship and business practices have been scrutinized by some since the video hit the internet last week. Sgt. Ryan says, “the farm will be put on notice to change their training methods. Any future events may not be met with the same end as this one.”

A minor horseback riding student videoed the farm’s head trainer, Kim Smith, allegedly beating the lesson horse with a lunging whip when it wouldn’t move forward. Prior to the recording, a student was reportedly having trouble riding the 14.1 hh pony named Cowboy. Smith told authorities Cowboy stopped following commands under saddle. She tried to ride him and then put him on the lunge line. Smith attributed the lunging problems to a “bit issue.” Sgt. Ryan says Smith told him the child continued the lesson after the trainer recognized the issue.

Cowboy is owned by the stable and is used regularly in the farm’s lesson program. The gelding is also leased to students.

Three complaints regarding the incident were received by authorities. A photo of Cowboy taken after the lunging session allegedly 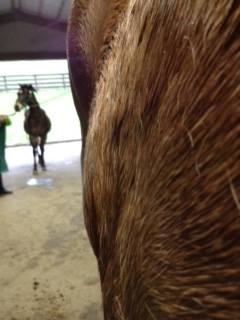 shows welts from the whip making contact with the pony’s body multiple times. Sgt. Ryan first saw Cowboy on Tuesday, a day after the complaint with the video was filed. Although he has the photo, he says there was no sign of injury to the pony upon his arrival.

Numerous other complaints were filed regarding Smith. According to Sgt. Ryan, those were irrelevant to the current situation being investigated, due to the allegations occurring out of the state or out of the county. Some of those filing complaints alleged Smith has used similar techniques at other times and on other horses.

Cumberland Riding Academy, located in Hendersonville was inspected by authorities Friday. The hunter/jumper boarding and training stable is owned by Daniela Romo-Leroux. The horses and facility were deemed in excellent condition, according to the department.

The stable’s owner did not return our message.