A female suspect was arrested Wednesday after being indicted by a Trigg County grand jury in connection with the murder of equine veterinarian, Emily 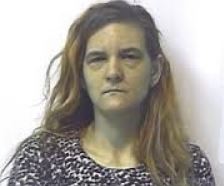 Champion, DVM and her parents. Ann Plotkin (right) is charged with three counts of complicity to murder and resisting arrest.
Plotkin allegedly defended Ryan Champion on social media after his arrest last fall. “Why is it so much easier to believe in lies and rumors? I’ve known Ryan Champion 20 years. I know he’s NOT GUILTY! He didn’t do anything wrong! For all the people, who are talking out their a*****, about things they know nothing about, You should all be ashamed of yourselves!!! Ryan, has gone though, And is going though alot. People, Leave him alone!!!”
Champion is accused of killing his parents, his sister, and a fourth individual named Vito Riservato that authorities say conspired with Champion. The bodies were found at the Champion home in late October 2014. Champion faces the same charges as Plotkin, plus two additional for allegedly kidnapping his sister and a count of capital murder for the alleged murder of Riservato.
Champion is scheduled to be in court Friday, but he will be looking for a new attorney. His criminal defense attorney Thomas Osborne of the Paducah-based firm Osborne & Graves, PLLC has filed a notice to withdraw from the case. In December, Osborne joined Champion’s case and told the court he would be ready to take it to trial in 30-days.
Plotkin is scheduled to be arraigned Friday. The state is seeking the death penalty against both defendants.