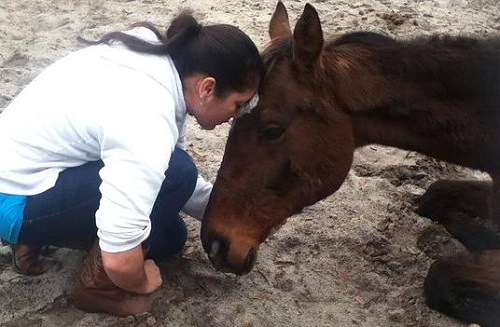 Trish Sylvester stayed with Major in his final hours.

A South Carolina farrier was arrested Tuesday after turning himself in to authorities. Keith Rabon is charged in connection with a thoroughbred gelding’s death.

Rabon is charged with misdemeanor treatment and care of animals. The arrest affidavit states the horse shoer “did not properly care for or provide adequate food and care for a 14 year old horse.”

Rabon appeared before Horry County Magistrate Bradley Mayers who released him on a personal recognizance bond. Also arrested was local resident Colby Sessions.
Once a successful racehorse, the horse named Major left Rabon’s farm in emaciated condition, according to sources, on December 27, 2013. Trish Sylvester says she was going to nurse the ailing gelding back to health, but she didn’t get the chance.
Major died three days later. 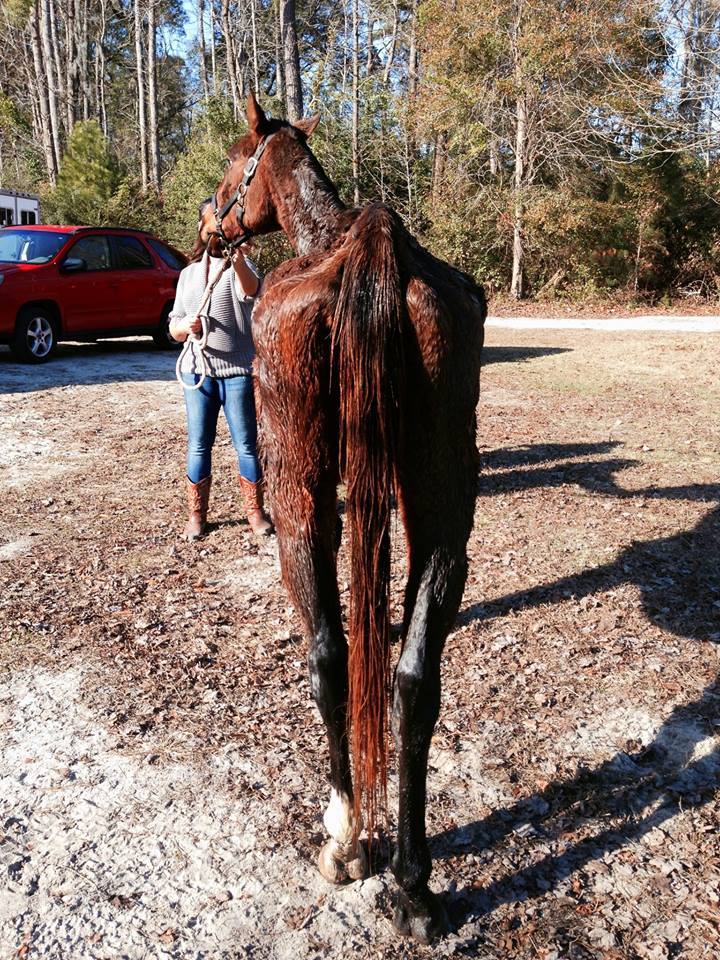 The veterinarian report states the bay gelding was a 1 on the Henneke Body Condition Scoring System, signifying an extremely emaciated body condition.
“Major’s death and condition preceding death was caused by at least two months of severe malnutrition, and that this care did extend up to the time frame immediately preceding his purchase by Trish Sylvester.”
The necropsy report states Major died from major organ failure due to either chronic malnutrition or the complications of refeeding syndrome. Refeeding syndrome refers to the complications that come with re-providing proper nutrition to chronically starved horses. Sylvester’s veterinarian had Major on a special feeding plan, but according to the report, Major had an impaction of oats prior to his death. “I feel that in an attempt to make it appear that he had been fed, his impaction was caused and the deadly consequences of refeeding syndrome were initiated.”
The horse also suffered from skin issues, including severe rain rot. The vet was unable to determine the cause of large patches of missing hair on his right side that “resemble chemical burns.”
Sylvester says there are two types of abusers, which she finds equally to blame for Major’s death. “One withholds love, food and nurturing … the second is the one that watches and says or does nothing.”
Phyllis Martin Rhodes, a volunteer with South Carolina Awareness and Rescue for Equines Inc. (S.C.A.R.E., Inc.) , and others in the community say they are outraged that Rabon is charged with a misdemeanor for his alleged crime. “It is a shame when state laws protecting animals are not enforced because law enforcement officials are not familiar with them, and according to one Horry County Police Department Officer, they don’t want outside assistance from anyone with knowledge of such laws.”
Lt. Rob Kegler from the Horry County Police Department said the case was presented to Solicitor Scott Hixon who determined there was probable cause for the misdemeanor charge of treatment and care of animals.
Rabon has been accused of horse abuse previously. He is on the United States Department of Agriculture’s (USDA) list of suspended individuals for violations of the Horse Protection Act (HPA.) He is serving a three-year suspension, which expires later this year.
According to a source, the USDA-APHIS was contacted by at least one person multiple times in 2012 and 2013 regarding Rabon allegedly violating the conditions of his suspension. Tanya Espinosa, a public affairs specialist with USDA-APHIS said, “we are currently looking into the allegations contained in the emails that we received.” When asked if the allegations were ever looked into previously, Espinosa said they take all complaints seriously and look into each allegation made. “Once we look into those allegations, we decide whether to take further action. Other than that, I cannot provide further information on specific complaints or allegations made and when it is or was looked into. However, please know that we have and continue to look into the allegations made about this owner.”
Rabon is scheduled to be back in court on February 5. If convicted, he could face 30 days in jail and/or just over a $1,000 fine.
Click to View Additional Photos 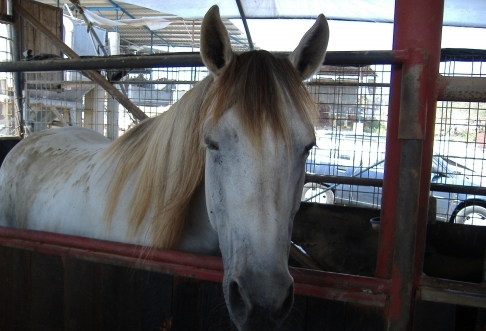