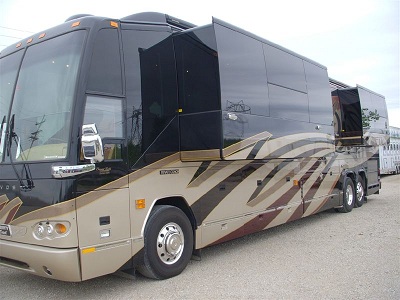 The US Marshals Service received only a single bid for the luxury motor seized from former City of Dixon comptroller Rita Crundwell. Feds rejected the bid since it came in below the $1 million reserve.
Bidding ended Wednesday for the custom 2009 Elegant Lady series Liberty Coach motor home that had a list price of $2.1 million. Crundwell reportedly purchased the RV in 2008 for over $1.5 million with funds allegedly stolen from the city. Court documents state she was still making payments on the RV and owed more than $400,000 at the time of her arrest.
Prosecutors allege that Crundwell financed her extravagant lifestyle, which included two farms, multiple homes, jewelry, and top AQHA show horses, with the $53 million she stole from the residents of Dixon. She has pleaded not guilty.
The Marshals Service will make another attempt to sell the RV. If Crundwell is found guilty, the funds from it, and any other seized assets sold will satisfy her debts and repay her victims according to the Feds.
A sale of more than 400 of Crundwell’s quarter horses is planned for next month.