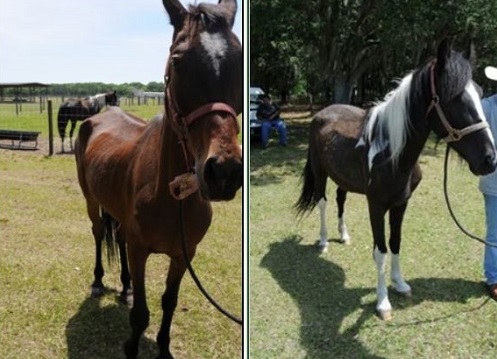 Valentine (left) and Flower (right) on April 3, 2014 after they were seized from RVR Horse Rescue by authorities.

A Florida horse rescue accused of neglecting two rescue horses entered into an agreement with the sheriff’s department to keep its doors open. For the next year, RVR Horse Rescue will be supervised by veterinarians and sheriff deputies.

The rescue’s operator, Shawn Jayroe, entered into a Joint Stipulation and Agreement with Hillsborough County Sheriff David Gee. Court documents state the two horses seized from RVR Horse Rescue, named Valentine and Flower, will remain with the sheriff’s office and be donated to the Florida Sheriff’s Youth Ranch. 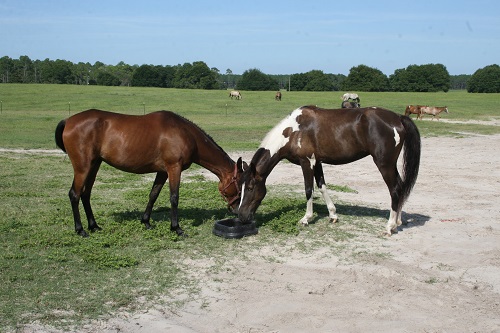 On January 26th, RVR Horse Rescue obtained ownership possession of the bay Arabian and pinto Tennessee walking horse after a judge granted the Hillsborough County Sheriff’s Office (HCSO) petition for “custody, control, and possession” of the horses on January 24th. The horses were donated by HCSO to RVR Rescue on February 4th — five days after the court awarded the agency ownership of the animals following a neglect case.

Deputies seized Valentine and Flower from RVR Horse Rescue in April because the horses remained “extremely skinny, grossly underweight and malnourished,” according to court documents. The HSCO filed a petition with the court seeking ownership of Valentine and Flower saying the rescue was not feeding the horses according to the re-feeding plan recommended by multiple veterinarians, including their own, Surgi-Care Center for Horses. The agency also accused the group of not providing veterinary recommended medical care for the mares.

Court records state the rescue claimed there was “miscommunication of the re-feeding program which caused the horses not to thrive much in the 65 days they were at RVR.”

A partial ruling issued in May by the judge stated, “the only reasonable conclusion to be drawn by the Court at this juncture of the proceedings … is that the only explanation for the condition of both horses at the time they were removed from the care of the Respondent was malnourishment due to lack of proper nutrition.”

Despite the judge’s partial ruling, RVR Rescue had the opportunity to present additional evidence and testimony to the court at a later date. However, the rescue’s attorney filed a motion to withdraw for unknown reasons.

The rescue was given additional time to secure new legal counsel to continue the trial, but chose to settle the matter with authorities.

According to the settlement, RVR had to retain a veterinarian advisor for an initial and on-going farm inspections and regular recommendations regarding the non-profit’s horse management practices. John Crews, DVM, MS from Florida Department of Agriculture and Consumer Services (FDACS) and Daniels & Daniels Equine Services will be fulfilling the functions, according to the sheriff’s office.

Additionally, when a new horse enters or leaves the property, RVR must notify HCSO within five days. HCSO also has the authority to make unannounced visits, inspections and examinations of RVR’s property and all animals in RVR’s possession care, custody, or control.

During the year probationary period, if RVR does not comply with the recommended farm management program, RVR will be given 10 days to correct the situation. If that doesn’t happen, HCSO can request another evidentiary hearing and if “RVR fails to present by clear and convincing evidence that they are able and fit to have custody of and provide adequately for the equine animals, the Court will order that RVR immediately cease operation and relinquish any and all equine animals in its possession, care, custody or control.”

A sheriff’s spokesperson says Valentine and Flower arrived at their new 1,000 acre home in Live Oak on Thursday and are doing well.

RVR Rescue did not return our message for comment.

Note: In an effort to bring you the most accurate news coverage, Rate My Horse PRO added two corrections in paragraph three, which are in bold type. 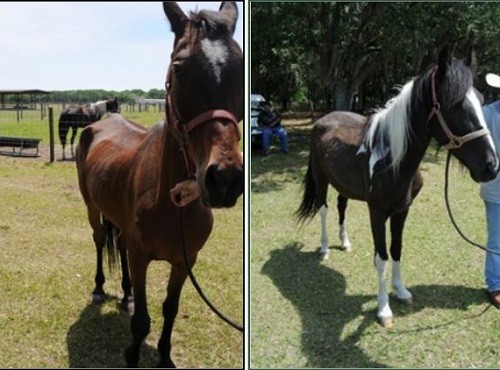