One of the horses seized by authorities from Rocky Acres Rescue and Sanctuary.

Arrest warrants have been issued for two rescue operators in Montana who are facing more than 30 felony counts of animal cruelty. Authorities seized 29 horses from Rocky Acres Rescue and Sanctuary in early March.

The warrants were issued for Tom Jessberger and Dalene Ann Rindal on Friday. Each face 35 charges of cruelty to animals for allegedly neglecting horses they were supposed to care for under the guise of a horse rescue. According to the IRS, the rescue is not an approved 501c3, although the horse rescue reports it applied for the status. The group’s board members include Tiffany Simpson, Keith Simpson, Donna Lane, and Harley Hewitt.

Located in Townsend, Jessberger and Rindal also operated a horse boarding and training business out of their 10-acre property, which has reportedly been vacated and put up for sale.

The horses had lice, untrimmed feet, untreated wounds, and had a lack of dental care, according to charging documents. The equines’ Body Condition Scores ranged from a 1 to 4. The majority of the horses were at the lower end of the scale with only three scoring as high as a BCS of 4, according to an affidavit. The BCS goes from 1-9, with 1 being extremely emaciated and 9 being obese.

Veterinarian Tahnee Szymanski, DVM opined after examining the horses that the animals were not ill, but their emaciated state was due to “insufficient nutrition, both of inadequate volume and poor quality.” Five goats were also removed from the property.

Authorities executed another search warrant and unearthed animals buried on the property. They received reports from owners who were boarding their horses at the stable, but their animals were not seized.

A civil suit is pending after the defendants refused to release a red roan mare named Chili back to her owners, claiming unpaid boarding fees. Chili’s body was discovered buried and positively identified by her livestock inspection number. Lab tests confirmed her bone marrow fat content was .2%. The average fat content for bone marrow in horses is 81.7%. A necropsy confirmed Chili died from starvation.
Under the charges, the maximum penalty could be up to 68 years in prison and $85,000 in fines.
The pair is scheduled to appear in court on April 18.
Stay with Rate My Horse PRO as we bring you more from this case. 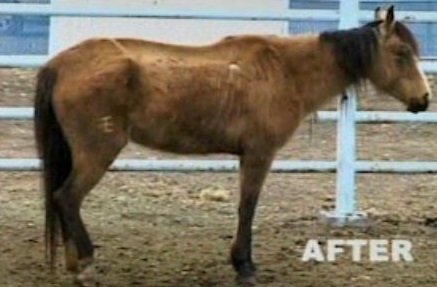 Twenty-nine horses were removed from a purported horse rescue in Montana after authorities continued to receive complaints alleging neglect. Deputies executed a search warrant leading to the seizure of the equines and five g...
Read More