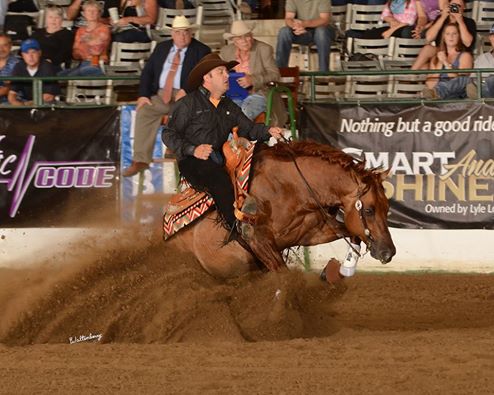 Iceman was allegedly poisoned at the 2015 Reining by the Bay (seen competing at earlier date).

A horse show management group is asking for your help after three reining horses were purportedly sabotaged over the weekend at a California competition. A $23,500 reward is offered for a lead that helps find and prosecute the person responsible for the alleged acts, including the poisoning of a stallion.

The attacks took place at the Woodside Horse Park during Reining by the Bay’s 2015 event. On the afternoon of Saturday, July 25th, SG Frozen Enterprise was allegedly poisoned. Veterinarians treated Iceman when he began suffering from a bout of diarrhea, sweating, and pain. Additional details are not being released due to the on-going investigation, according to his owners.

Iceman is recovering while his owners at Silver Spurs Equine, in Arizona, wait on a toxicology screen.

During the early hours of Sunday, July 26th, a loop nail was allegedly driven into the foot of an unnamed Reining Derby Champion Stallion.

A Reining Futurity Stallion was also released from his stall during the early morning. The horse is reportedly in good condition.

We have confirmed the three horses have one thing in common. They are trained by reining horse trainer Andrea Fappani of Fappani Performance in Arizona. The Italian just reached a major milestone in his successful reining career of $4 million.

Brumley Management Group’s Amanda Brumley says regarding the identity of the perp, “we still don’t know exactly who this person is”. She elaborates that it could be someone from inside the industry or possibly an outsider from an “animal rights group”.

The National Reining Horse Association says it is aware of the incidents. Assistant Commissioner Christa Morris says, “the humane treatment of horses is paramount and the abuse of any horse will not be tolerated.” Procedures are in the handbook to address the abuse of horses at an event, Morris adds.

The Woodside grounds have 24-7 security monitoring and those tapes have been turned over to authorities for review.

Brumley says there will be big changes going forward at shows they manage. “There will be security at all barns and arenas. I’m not going to let this happen again.”

The San Mateo County Sheriff’s office tells us that the investigation has been handed over to county animal control. Our messages have not been returned by the Peninsula Humane Society and SPCA.

Brumley Management Group offered a $10,000 reward and Michael and Michelle Miola from Silver Spurs Equine added another $10,000 to help find the alleged animal abuser. The reward stands at $23,500, according to Brumley as additional funds trickle in.