Ten months after a “training” session turned deadly for the California reining derby horse, Bella Gunnabe Gifted, criminal charges have not been filed.

Steve Walker, communication director for the San Diego County District Attorney’s Office says the case remains “under review.” It was referred to the prosecutor’s office in November 2013 by animal services. The animal agency recommended criminal charges be brought against two unnamed individuals for the alleged abuse of the mare. 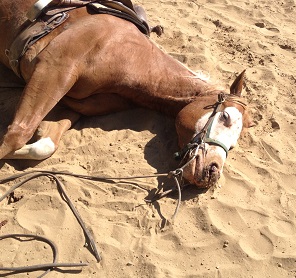 The six-year-old mare, owned by Martha Torkington, was trained by Mark Arballo and his girlfriend, Patrice Hohl, of Arballo Reining Horses. The pair worked out of The River Valley Ranch, in San Diego, which is now called San Diego Equestrian Center. The boarding stable and training facility is still owned by Torkington and her husband, George Kiss.

In September 2013, Arballo allegedly left Bella “bitted up” in a curb bit, alone in a solid round pen while he “taught two lessons and rode another horse.”

Bella was found lying on the ground, still tacked, her nose mutilated, bleeding, and blood was coming out of her ear, according to an eyewitness. About two hours after she was found, she was humanely euthanized by a veterinarian.

This was the second death at the farm during a “training” session. In May 2012, a seven-year old gelding named Shiner died while being lunged by Araballo’s girlfriend, Patti Hohl, also a reining trainer. According to animal control’s report, a witness saw the horse “being lunged with its head tied and it reared over.”

Initially, Hohl, who owned the horse, told authorities “the horse just collapsed and died.” Days later she told the investigating officer “she was lunging the horse before she rode him. He did have a saddle on and he just dropped dead, she said he shook for a little while then died.”

Criminal charges were not filed in Shiner’s death. Documents state authorities did not have a cooperating witness and the body was decomposed by the time it was exhumed.

An official from the American Quarter Horse Association says Arballo is not currently an active member of AQHA, after his membership expired in January.

Arballo and Hohl reportedly moved from California to North Carolina. The six-year old quarter horse was purchased by Martha Torkington in June. The mare was in the training program of Mark Arballo and his girlfriend, Patrice Hohl, of Arballo Reining Horses. The pair worked out of The River Va...
Read More