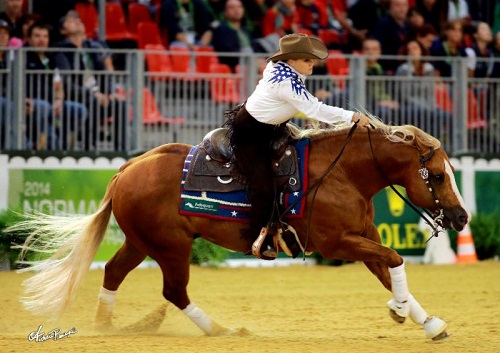 by Mark Coley
The Adequan U.S. Reining Team kicked off the opening week for the United States with a spectacular performance at the 2014 Alltech FEI World Equestrian Games earning the Team Gold medal. Andrea Fappani riding Custom Cash Advance, Shawn Flarida riding Spooks Gotta Whiz, Jordan Larson riding HF Mobster, and Mandy McCutcheon riding Yellow Jersey all gave electric rides to take the U.S. to a large winning margin, earning a team score of 677.5.
Today’s FEI Reining World Championship was the conclusion of the Team Championship and the continuation of the first round of the Individual Qualifying Competition. Belgium earned the Team Silver medal with a score of 663, and Austria earned the Team Bronze medal with a score of 658.5.
After Fappani and Larson started things out convincingly yesterday at the Caen Exhibition Center, the final two U.S. Team reiners had to keep up the high scoring rides to ensure a Gold medal finish. Mandy McCutcheon (Aubrey, Texas) riding Yellow Jersey did just that, sliding her way to a score of 224, tying her with Fappani and Martin Muehlstaetter of Austria as the second best score of the 82 rides over the two-day Championship.
Receiving high marks for her circles to both the left and right, she had accurate transitions that helped propel her up the leader board. “In the first turn, I maybe was a little rough with my hand, so when I did that I said to myself, ‘Okay, you’ve got the first maneuver, you’re going now, trust him and believe that he’s going to do his thing,’ and he did” explained McCutcheon. She added, “It’s an honor to be here and to represent our country, it’s just unreal.”
Coming from a well-known reining family, McCutcheon was thankful for the support she has received from her husband and fellow squad member Tom, as well as her parents, Colleen and Tim McQuay. “I convinced him (her father) that I needed him here and in my corner like always, and it has made such a huge difference even just having him here giving me the nod making sure I am doing the right thing,” said McCutcheon.
With Team Belgium’s final rider completing his pattern, a six-point lead took the pressure off U.S. Reining National Champion and 2010 Alltech FEI World Equestrian Games Team Gold Medalist Shawn Flarida (Springfield, Ohio), as the U.S. had secured the Gold position. Flarida, riding Spooks Gotta Whiz, did not let that hold him back from putting on a master class for the enthusiastic audience, earning a 229.5, the highest score of the Team Championships. In a flashy ride, he showed off his mount’s characteristically impressive rollbacks, circles, and accurate spins.
“I’ve been so fortunate to be able to ride this horse for the last three years; he’s great minded. I’m honored to show him and I’m honored to be here,” said Flarida after his ride. The atmosphere was electric and Flarida noted, “It’s a blast to be here. To ride out there when the people are screaming, there’s not a better feeling.”
For the U.S., the impressive rides did not stop there, as Tom McCutcheon (Aubrey, Texas) riding Dun Git A Nicadual and competing as an Individual, kept the momentum going for the squad, looking towards Saturday’s Individual Final. Impressing the judges with his sliding stops and rollbacks, he earned a score of 221.
After his ride McCutcheon said, “My horse was a lot better than I was,” referencing an over-spin. “My horse wanted to be really good, I made a couple of dumb mistakes out there, but hopefully I got them behind me and for the Individual round. Maybe I am done with all that and I will go show better.”
Team and Individual Gold medalist from the 2010 Alltech FEI World Equestrian Games, McCutcheon commented on the strength of the Adequan U.S. Reining Squad this year, saying, “We’ve got a great team and I am really proud of this team. I think this is as strong of a team as we have ever had from top to bottom.”
Looking back on the U.S. competitors performances, Chef d’Equipe Jeff Petska said, “It’s an honor to get to see them do what they do. It’s a great pleasure for me to watch them prepare and watch them become a team. These riders have the benefit of a tremendous amount of work and a tremendous staff that makes all this happen.”
On Thursday, August 28, Troy Heikes will compete in the Second Individual Qualifier, with the top five combinations from that round moving forward into the Individual Championship Final.
Fappani, Flarida, Larson, Mandy McCutcheon, and Tom McCutcheon’s scores have qualified them for Saturday’s Individual Final Competition since they are part of the top 15 scorers over the past two days of competition.
Get a behind the scenes look at the reining competitors in France with the Chez Philip show. 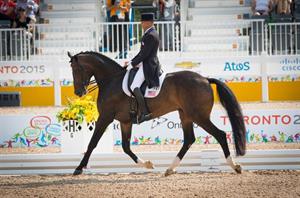 Strong performances by all four members of the U.S. Pan American Dressage Team over two days at the 2015 Pan American Games resulted in a Team Gold medal win and direct qualification for the 2016 Olympic Games in Rio de Jane...
Read More