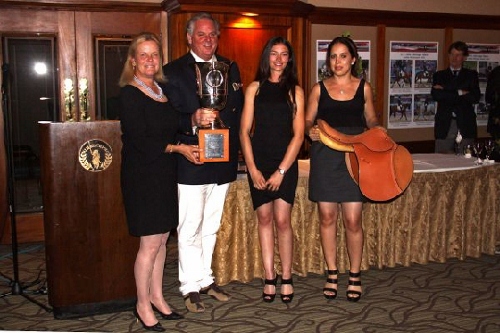 Eighteen year old show jumper Reed Kessler was awarded the 2013 Lionel Guerrand-Hermès Trophy. The award is presented annually to a young rider in an Olympic discipline who exemplifies sportsmanship and horsemanship.

In 2012, Kessler advanced to the highest levels of the sport, competing at the Olympic Trials and winning the USEF Show Jumping National Championship. After her stellar performance throughout the Observation Events, Kessler and her top mount Cylana were selected to represent the United States at the 2012 London Olympic Games.

Kessler was presented the prestigious award at the USET Foundation reception on Friday in Wellington.

“The list of riders who have stood in this exact place giving this same speech is a truly exceptional group, and I am honored to join their ranks,” stated Kessler. “One year ago, I sat in this audience, wondering how my first Florida show season, free from all the age restrictions, would go. I sat wondering if I would be ready for the approaching Olympic Trials, and most of all, who would make up the team that we would send to London. It did not cross my mind that one year later I would stand here, having been a member of that team. It did not occur to me that my new horse, Cylana, which we were still so unfamiliar with, would carry me to those Games. It is truly amazing what can happen in a year, and when I look back, this will probably be one of the best of my life.”She continued, “Although my name is the one that will be inscribed on the trophy, I can only take a very small percentage of the credit. First. I have to thank the USET Foundation, who has supported me by funding programs like the European Young Riders Tour, without which the Olympics would have been my very first U.S. Nations Cup Team. I also have to thank the ladies behind the scenes that work tirelessly to take care of my horses. A thanks also goes to our vets and blacksmith, who are also critical members of our team.”

“It is impossible to name everyone who has touched my career and that of my horses, so thank you to everyone who has helped along the way,” acknowledged Kessler. “I would like to thank Andre Dignelli and Patricia Griffith and the whole team at Heritage Farm, who gave me a great foundation from Short Stirrup to Junior Jumpers. After I transitioned from Equitation to Jumpers, I began training with Katie and Henri Prudent. I jokingly call them my fairy godparents, because they transformed an ordinary young girl who loved horses and taught her how to make that passion a career. Their incredible teaching is further evident by the fact that I am their third student to receive this prestigious award. I cannot thank them enough for everything that have taught me and everything they continue to teach me. Next, I’d like to thank my parents, Murray and Terri Kessler. I doubt any parents could bestow any more love and support on their child than my parents have. Way before the grand prixs and the glory, my parents had the same enthusiasm for the sport and dedication to support me in whatever path I chose.”

Kessler was the youngest person in Show Jumping history to compete at the Olympic Games. The team from the United States finished in sixth place, facing fierce competition from the other nations. She also represented the United States during the Nations Cup at Spruce Meadows. Later in the year, Kessler was the winner of the $100,000 President’s Cup Grand Prix at the Washington International Horse Show, where she was also the Leading Jumper Rider. In 2011, some of Kessler’s accomplishments included becoming a member of the U.S. Show Jumping European Young Riders Tour and winning the Young Riders Grand Prix and Young Riders Nations Cup in Austria. She has now begun her professional career at Kessler Show Stables.

Patrick Guerrand-Hermès established the Lionel Guerrand-Hermès Memorial Award in 1983 in memory of his son, Lionel, who was tragically killed in an automobile accident in 1981 at the age of 18. Lionel trained with the United States Equestrian Team and was talented enough to be considered an Olympic hopeful. A perpetual trophy designed by Patrick Guerrand-Hermès is inscribed annually with the winner’s name and permanently displayed at the USET Foundation headquarters in Gladstone, NJ.