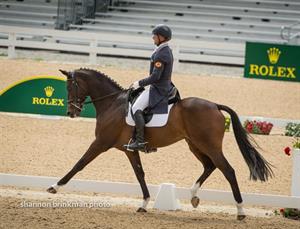 Competition began Thursday at the Rolex Kentucky Three-Day Event presented by Land Rover with the first day of dressage. Thirty-one horse-and-rider combinations performed their test in the Rolex Stadium in front of the Ground Jury of Sandy Phillips (GBR), Gillian Rolton (AUS), and Christina Klingspor (SWE). The U.S. riders took a commanding lead on Thursday holding the top positions on the leaderboard.

Michael Pollard (Dalton, GA) sits in first place with Mensa G after scoring 49.5 following day one of America’s only CCI4*. He performed a lovely test with the 16-year-old Thoroughbred gelding owned by himself, Carl Bouckaert and Nathalie Pollard.

“I’m happy, not surprised necessarily,” commented Pollard. “He’s a horse that can do a very good test. I was thinking more about trying to execute the best [test] that he could do and I thought his work is probably the best work I have gotten out of him. We left some points on the table with some bad changes but other than that I thought he was really good. Honestly I thought someone would sneak in front of me today but I’m not really surprised necessarily.”

Pollard had a good start to the competition, and while he knows it is only the first day, he says he hopes his success will continue throughout the weekend. When asked about cross country day on Saturday, Pollard said “It’s a four-star so it’s going to be hard for everybody, but I’m riding a very good horse. I feel good about our preparation so it’s just a matter of treating it like another event and doing my best.”

Sitting in second place only 3/10ths of a point behind Pollard and Mensa G are Will Faudree (Hoffman, N.C.) and Jennifer Mosing’s Pawlow with a score of 49.8. With the 15-year-old Irish Thoroughbred gelding, Faudree rode a smooth, obedient test with good trot work and clean changes.

“In my test today, I was happy with my trot work,” Faudree stated. “I was a little conservative in the first medium trots, but all and all I was happy with his trot work. I think where I threw away too many points today was in the very first counter canter loop. He sucked behind me and at home I would have smacked him with the stick and kicked him and kept going but I just wanted to keep the counter canter.”

Doug Payne (Aiken, S.C.) is in third place with Crown Talisman on a score of 51.2. He and his and Amelia and Larry Ross’ 11-year-old Holsteiner/Thoroughbred gelding performed a polished test in the atmosphere of the Rolex Stadium. Despite the pair’s good placing, they will be withdrawing from the remainder of the competition to set their sights on the Saumur CCI3*, for which they received a Land Rover Competition Grant to gain valuable experience at the major European competition.

“I hope and pray that ultimately we will be back again in years to come,” said Payne of his plan to withdraw. “I was entered here at Rolex and especially for this horse who is a bit more excitable and could potentially be affected by environment, there was no better place than this in this hemisphere to go and compete and see where we measure up so hopefully we will be better following today’s competition.”

Day two of dressage begins tomorrow at 10:00am EST with Lillian Heard and Share Option.