A search warrant was executed at a New Jersey boarding stable after a two-month investigation yielded millions of dollars in drugs. The investigation landed authorities from multiple agencies at K&C Stables in Vineland.
The prosecutor’s office announced more than $3.75 million of heroin was seized from multiple locations. A dozen individuals have also been arrested. Rate My Horse PRO asked Cape May County Prosecutor Robert Taylor if any of those arrested during the bust were connected to the stable, but he said no additional information would be released until next week. “This is an on-going investigation.” When asked if he expected additional arrests his answer remained the same. 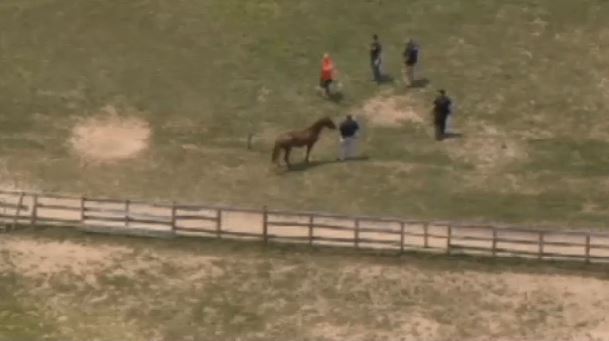 It is unclear what officials were looking for at K&C Stables as helicopters flew overhead. Heavy equipment was used to dig behind the stable, according to NBC40.net, as men walked the property on foot. The Paso Fino horse farm was one of many locations searched by local, state, and national agencies including the FBI, DEA, and Homeland Security.
The stable’s website is now offline, but a cached copy shows the business offers horse boarding, training, horseback riding lessons, trail rides, horses for sale, pony parties and other events for children.
Our attempts to reach someone at the barn by phone were unsuccessful.