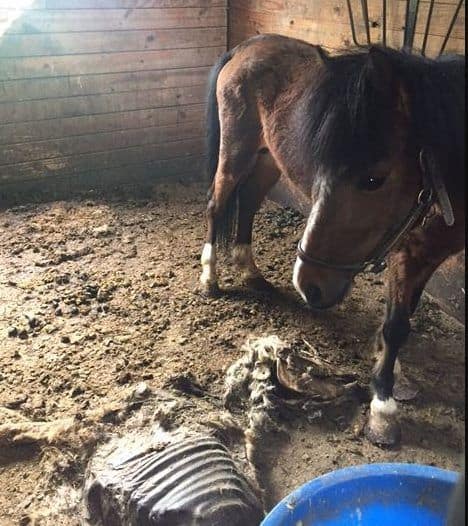 A New York Welsh Pony breeder is facing charges including animal cruelty after a tip led authorities to her gruesome secret.

Officials arrested Jeanne Ryan, 48, of Argus Farm in Goshen after discovering the severely decomposed remains of four adult horses and a foal that “presumably starved to death” while locked in her barn.

The foal was in a nursing position.

Authorities seized an emaciated stallion stabled with a horse carcass. Known as Shamus, the pony was eating wood from the stable to survive because he had no food or water. He also had infected and overgrown hooves.

They found the remains of six more horses on the property.

Ryan faces a count of misdemeanor animal cruelty and five counts of failure to properly dispose of dead animals.

The two lived together for four years on Ryan’s more than 40-acre farm. “I was the workhorse and I got tired of it,” Garcia adds. He characterizes Ryan as “lazy,” and says she spent all of her time on the internet.

Garcia tells us the Welsh Pony stallion Helio survived but he doesn’t think his Palomino horse was so lucky.

When Garcia left Ryan around 2015 he says he only got two of his four horses off the farm. When he tried to make arrangements for a horse transporter to pick up the last two, Garcia says Ryan, a retired NY Police Department officer, threatened to have him arrested if they came on her property. Garcia didn’t pursue his ownership rights further.

Some may know Ryan from her past work booking hauls for horse transporters. She reportedly used her Argus Farm as a layover facility.

Horses in good body condition, including the stallion Helio, and dogs, remain on the property. The horses’ hooves are in disrepair, according to officials.

Ryan is scheduled for arraignment on September 13.