Former Peaceable Farm horse Dillon (above now - below before) is available for adoption at Central Virginia Horse Rescue.

The trial of a former Virginia horse rescue operator charged with animal cruelty was continued Friday. The now notorious Peaceable

Farm’s Anne Shumate Goland is scheduled to stand trial on June 10, 2016.
Orange County’s Commonwealth Attorney Diana O’Connell tells Rate My Horse PRO she expects additional cruelty charges to be filed. Additionally, she says her office is combing through Peaceable Farm’s financial records to see if any crimes were committed under the guise of the non-profit.
Goland is charged with 27 counts of misdemeanor cruelty to animals. The charges represent Goland’s alleged abuse of 10 horses, 10 cats, 5 dogs, and 2 chickens, according to the sheriff’s office. 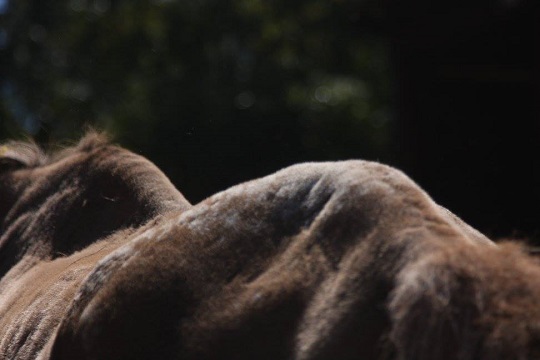 Goland was charged last October after authorities served a search warrant at her Somerset farm turned equine death camp. Officials discovered dead and emaciated horses, dogs, and cats. A total of 81 horses were removed from the property in addition to many small animals. Many of the horses continue to recover at the horse rescues that stepped up to care for them.
No animals remain on Goland’s Somerset property. The 13 horses and bull have been re-homed.
Goland is out on bond, but is to have no contact with any animals as a part of her bond agreement. If anyone witnesses Goland, who is supposed to be living in Warrenton, breaking her bond the Orange County Sheriff Department should be notified at 540-672-1200.
Stay with Rate My Horse PRO for an in-depth investigation regarding this case.
View Case