A grand jury may have the opportunity to decide if a New Jersey horse rescuer will face indictment for the alleged abuse and death of multiple horses. The news comes after additional criminal complaints have been filed against Monica Thors of Mullica Hill.

Four third-degree complaints state Thors failed to provide the necessary care to four horses, which resulted in their deaths. The horses were all overweight and documents state Thors failed to follow veterinarian recommendations to modify the horses’ food intake so they could lose weight. The horses suffered from chronic laminitis, which led to their deaths or euthanasia. 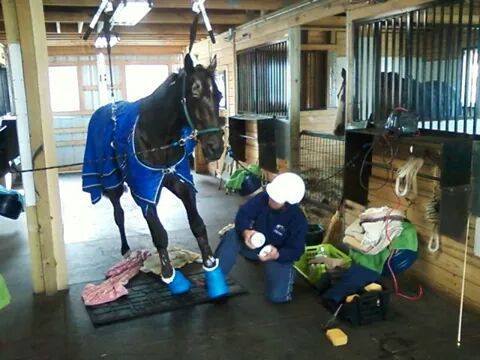 Photos show the one-time harness racing trainer trimming and drilling the horses’ feet until they appear to bleed. In the world of horses, the saying “no hoof, no horse” rings true, as one horse dangles from a sling hooked to the rafters of the barn. The stallion is unable to stand. Ultimately, he was one of the horses euthanized.

Thors also faces six fourth-degree complaints for knowingly causing seriously bodily injury to five horses and one goat. The complaints detail the injuries sustained by the animals that survived their ordeal after being seized from Thors.

Due to the nature of the complaints, the Gloucester County Prosecutor is reviewing the case. Prosecutor Sean Dalton has the opportunity to take the third-degree complaints to a grand jury to try to secure an indictment. Alternatively, the case could be sent back to municipal court. Until a decision is made by the prosecutor, the case is in a holding pattern since no one is afforded the opportunity to know when a case is going to a grand jury.

Thors was originally charged in December 2014 with inflicting unnecessary cruelty upon a living creature and one count of failure to provide necessary care. Both are disorderly persons charges.

Seven horses and a goat were seized from Thors’s 501(c)(3) organization, Monica Thors Animal Rescue, Inc., in December. The New Jersey Society for the Prevention of Cruelty to Animals (NJ SPCA) began investigating Thors in 2013. The agency didn’t remove the animals until the public became outraged and multiple news agencies spotlighted the on-going case.