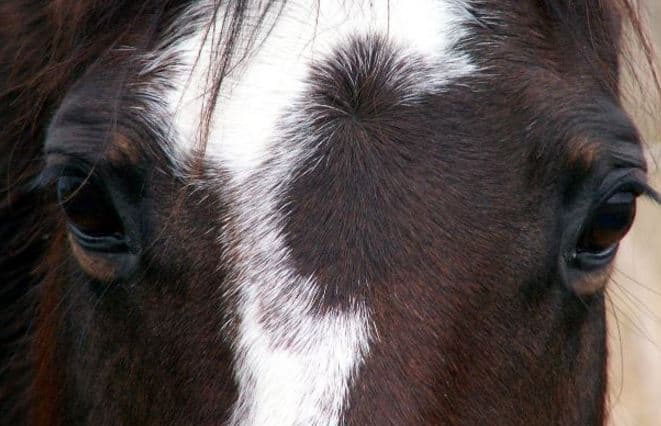 Humane Agent Keith Streff from the Animal Humane Society says, “the problem has been on-going for more than two years, and Dobbelaire has been unable or unwilling to fix it.”

She is charged with two felonies and six misdemeanor counts of overworking or mistreating animals. The probable cause affidavit states there is “a pattern of culpable negligence, resulting in the emaciation, suffering, and eventual death.”

Authorities state the majority of Dobbelaire’s 16 horses were emaciated in September 2012. Dobbelaire allegedly told investigators her vet was scheduled to euthanize two horses that day, which she classified as a 1 on the Henneke Body Condition scale – which is poor – or the lowest score before death.

Those horses, which were euthanized, were described by investigators as having “very little to no body fat, their rear hip bones were high above their back areas… and visible rib cages that had skin dipping in between the ribs at their separation points.”

The only round bale available to the horses that day had mold growing on it, according to court documents. They also noted the “horses had become so starved that they began eating away on the walls, possibly consuming the fiberglass insulation” from the barn. Although Dobbelaire spoke of a feed regimen for the horses, the documents say there wasn’t enough feed and hay pellets on the property to support it.

The defendant allegedly told investigators that her family was struggling with money.

A November visit found horses that were continuing to deteriorate without hay and the necessary water.

Dobbelaire says she’s been running a horse rescue for 15 years. Although not a 501(c)(3), she says Willow Ridge Equine Refuge and Sanctuary takes in horses and will find them permanent homes once healthy. She was unable to say when she took in her last rescue.

Dobbelaire alleges Streff trespassed on her property. She says she didn’t want him there and threatened to call the police. Streff says he was never denied entrance to her farm, and even had a sheriff deputy with him during his investigation.

An active volunteer in the horse community with 4-H and the Arabian Horse Association, Dobbelaire chaired the committee of an emergency hay fund, under the umbrella of the Minnesota Horse Council. She says, “I wasn’t eligible for assistance. Can you imagine the black eye that would give, if I was accepting money from a fund I was chairing?”

Minnesota Horse Council president Tracy Turner, DVM tells us he received an anonymous tip regarding the health of Dobbelaire’s horses a year ago. He says he spoke to her about it, and offered help, although she dismissed the idea that there was a problem.

Dr. Turner says he knows nothing about her running a rescue. The executive board suspended Dobbelaire Wednesday pending the outcome of the case.

The Minnesota Horse Welfare Coalition just launched its own hay bank with start-up funds from the Minnesota Humane Society and a private donor. Dobbelaire said she had not heard about the new resource for those needing hay.

Most of the horses in question have reportedly been re-homed, although Dobbelaire would only confirm there is currently at least one horse on her property.

Dobbelaire tells us she is hiring attorney Robert Richman. A judge dismissed 35 counts of animal abuse against Richman’s client Lowell Friday earlier this month. He ruled searches of Friday’s property were done illegally. Friday did not get any of his horses back.