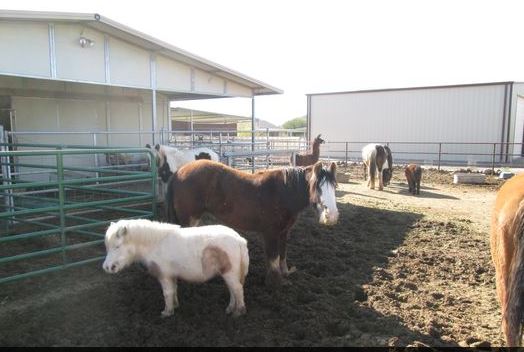 Two miniature horses at Andrea Mikkel's property where more than 100 animals were living prior to multiple seizures.

The Vice President of the Miniature Horse Association of Arizona is facing 80 counts of animal cruelty. Maricopa County Sheriff officials said Andrea Mikkel was arrested Thursday.
Complaints from neighbors led deputies to serve a search warrant last month on the property that housed more than 100 animals. Authorities say they found the house in “deplorable condition, with animal feces covering virtually every inch of the inside, with some piles stacked as high as one foot.” Spider webs covered most of the walls and entryways and cages with animals inside were scattered throughout the home. 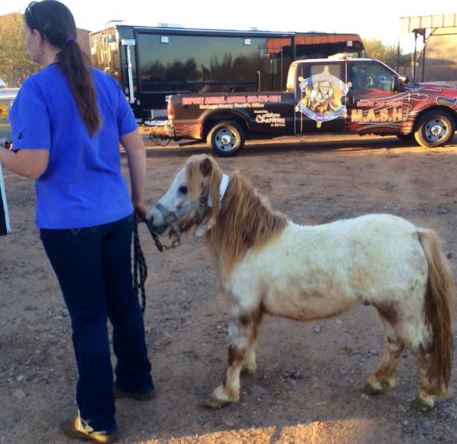 The animals kept inside allegedly did not have food or water. Some had open sores that had not been treated. Horses, miniature horses, zebras, alpacas, and dogs lived in the yard, allegedly without food and water. Most had medical issues.
Veterinarians determined 57 of the animals needed to be seized in January. Since then, at least 14 more have been removed from Mikkel’s  property including a longhorn steer, pigs, an alpaca, and sheep.
Mikkel was ordered by the judge at her initial appearance to find homes for all of her remaining animals.
Jimmie Sizemore, President of the Miniature Horse Association of Arizona told Rate My Horse PRO he has never been to Mikkel’s place, but he has offered support, “we have offered to help. No one has asked. That’s a bad situation.”
Sizemore says the organization has scheduled a general meeting for its members on March 7th. He says they will vote on if Mikkel should stay or go as Vice-President. “I have been out-voted by other board members to remove her from the board,” Sizemore added. “She has also been asked to step down twice.”
Mikkel is also a retired police officer who served 30-years on the force. “It is kind of disheartening that she got into this mess,” Sizemore says.
The maximum sentence for each count is up to a year in prison.
View More Photos