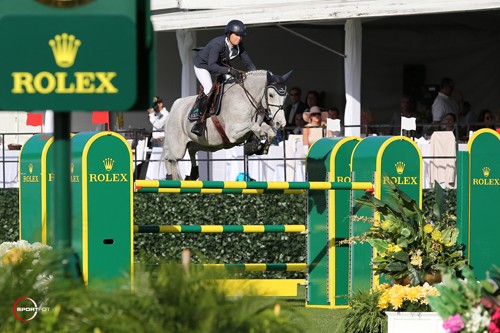 Anthony D’Ambrosio, of Red Hook, NY, set the course for Sunday’s competition, which featured 35 horses and riders jumping in a one-of-a-kind setting. With the backdrop of blue skies, palm trees, and sunshine on Florida’s Intracoastal Waterway, the course saw 13 clear rounds that led to a thrilling jump-off with seven double clear entries and a race to the finish.

Callan Solem (USA) and the Torlando Group’s VDL Torlando were the first pair to clear the jump-off course without fault and finished seventh in 43.10 seconds. Alexander Zetterman (SWE) and his own Flecu were faster in 41.83 seconds to place sixth. Margie Engle (USA) and Griese, Garber, Hidden Creek and Gladewinds’ Indigo took the lead in 40.74 seconds to eventually place fourth, and Beezie Madden (USA) and Abigail Wexner’s Vanilla followed with the fifth-place round in 41.48 seconds.

The final four riders were some of the fastest in the world and fought hard for a win in the prestigious competition where the option of a very tight inside turn and a gallop to the final fence was the deciding factor. Darragh Kenny made that turn with Oakland Venture LLC’s Fantasy and was fast and clear in 40.12 seconds to take over the lead from Engle. He eventually settled for second place. Brianne Goutal (USA) and Remarkable Farms LP’s Ballade van het Indihof were next, and did their best to catch the pair. They stopped the clock in 40.62 seconds to take third place. It was down to the final two.

Back-to-back Trump Invitational winner, Kent Farrington (USA), returned to defend his title after winning the inaugural event in 2013 with Amalaya Investment’s Dynamo and also topping the class in 2014 with Robin Parsky’s Blue Angel, but today was not his day. Farrington opted for a very fast outside turn to the last fence with Blue Angel and slipped in the turn, then had a rail down at the final jump. The pair’s time of 36.31 seconds would have given Farrington his third straight win in the competition, but the unfortunate rail put them in ninth place. Last to go, Laura Kraut and Cherry Knoll Farm, Inc.’s Cedric took the inside turn and came through the timers in 39.96 seconds, just ahead of Kenny and Fantasy, to earn the big win.

Kraut and Cedric, a 17-year-old Holsteiner gelding (Chambertin x Carolus Z), have had a long and illustrious partnership that includes team gold in the 2008 Olympic Games and many grand prix victories over the years. Most recently, they topped the $50,000 Holiday & Horses Grand Prix CSI-W 2* at the Palm Beach International Equestrian Center in November.

“I could not be more pleased with him,” Kraut said. “He is 17 years old, but he feels better than ever. He won his last outing a month ago out in Wellington and he has hardly jumped a fence until today. I gave him a little jump on Wednesday and then he came today and he feels great. I thought this would be a good event for him. I targeted him for this, and he came through. He is just an amazing horse, and we have such a relationship now. I feel like I can call on him, and he is there.”

Heading into the jump-off after seeing Farrington have a rail, Kraut admitted, “Did I breathe easier? Well yes, because Kent is so hard to beat, but I had not seen Darragh and Darragh can be equally fast, so I knew I had my work cut out for me. Actually, when I went through the timers I didn’t think that I had won. Cedric jumped so high through the double that it took me a second to get through that. I was quite relieved when they said I had won.”

“I was a little worried because I knew I had to add a stride down the line, the only line in the course, I had to do six and everyone else did five,” Kraut explained. “I thought I could just make up for it by continuing running everywhere, and he was jumping so high that I didn’t think I would have a fence down. I was fortunate that I watched Kent go before me. Beezie Madden also volunteered that she went around the Rolex clock and she slipped, so when I was in the air over that I thought that if I could just turn really short and pull him almost to a stop and turn, it was probably better than running right around. When you run that fast they are going to probably slip. It was perfect, he stood right up and he turned and went, so I think that is probably what did it.”

Following a great win and a beautiful day in Palm Beach, Kraut praised Donald Trump and Equestrian Sport Productions’ CEO Mark Bellissimo for putting on a fantastic event. With footing challenges in year one, Trump put up the money to redo the turf for the 2014 event. The new footing was put to the test with terrible rains in year two, but everything came together this time around.

“I was going to lead off with how amazing this event has evolved,” Kraut acknowledged. “Finally, on the third year, they got lucky. All of the conditions were perfect. It is probably the best grass footing in the world. I went last in the class and last in the jump-off, and I think I had ground as good as the first ones did. It was perfect. It was an absolutely great event.”

“We all look forward to coming here,” she continued. “It gives us something to shoot for after Christmas to start the year off and it was beautiful today. This is a special event. It is a beautiful location and the fact that Mark and Donald have put this together and put this on right here in Palm Beach, it is absolutely gorgeous. It is a prestigious event to try to win and I am very happy to win it.”

Bellissimo spoke about the day as well, declaring, “It was another great event. The weather could not have been more spectacular given what we experienced last year. I think this event has really grown in stature. Donald has been an amazing partner in this effort, and we have had a number of conversations about how we can take this to the next level. I think we are going to introduce something a little more innovative next year with more prize money. I want to thank Rolex for again being an amazing partner and stepping up to be the title sponsor here as well as the Tisbo family with Suncast, Land Rover, and Carol Sollak at Engel & Völkers. Without their help we could not make this happen. Congratulations to Laura. This is her third year here and the third time is the charm as they say. We are very proud of watching that effort. Margaret Duprey’s horse really rose to the occasion.”

Trump also praised the winner and was thrilled with another great event. “I want to congratulate the great champions,” he stated. “I know Laura really wanted to win this and now she has done it. What a great job you have done. It is bravery and it is talent and it is great horses. It was an honor and I want to congratulate Mark and his family for the fantastic job they do in putting the event on. Likewise, we have an excellent one in Central Park, so we have a couple of beauties.”

Trump and Bellissimo put on the first ever Central Park Horse Show in Trump Rink in New York City this September with great success, and look forward to the future of that event, where Kraut along with second and third place finishers Darragh Kenny and Brianne Goutal competed as well. On Sunday, Kenny guided his horse Fantasy to a great jump-off round that just got beat.

“My horse is a little bit greener and younger than Cedric, so I was fighting an uphill battle,” Kenny laughed after the class. “She is really talented and I really think a lot of her, but I knew that when I came out of the ring with Kent and Laura going after me, chances are one of them was going to beat me. It was a great class and this it the first year I have actually jumped this class, so it was really enjoyable. The footing is fantastic. The show is brilliant. Donald and Mark do an amazing job with it.”

Goutal also had an excellent round with her mare, Ballade van het Indihof, and praised the mare as well as Trump and Bellissimo’s efforts in the event.

“It was really special for me because I haven’t shown this horse in almost two years,” Goutal detailed. “She had some time off due to injuries and it is her first real grand prix back and for sure in the United States, she hasn’t been here in almost two years. I was absolutely thrilled with her. She is so amazing.”

“The venue is incredible,” Goutal continued. “In my opinion and I think most of our opinions, the Trump/Bellissimo team now has, if not the two best shows in the world, two of the best. Tropical venue wise, nothing compares to this one, especially with the footing upgrades and the prestige and everything that’s involved. The Central Park show, when you talk about an inner city show, we jump a lot during the year and over the summer in all these big places and in my opinion Central Park is incomparable to anywhere else as well. A huge thank you for those two.”

Net proceeds from the Trump Invitational benefit the 2015 Great Charity Challenge presented by Fidelity Investments® (FTI GCC), which will be held at the Palm Beach International Equestrian Center on Saturday, February 7. The pro-am team competition, founded in 2010 by Mark and Katherine Bellissimo and their daughter, Paige, has distributed more than $6.2 million to more than 100 Palm Beach County charities over the past five years. In addition to 28 charities already selected to participate in this year’s competition, four more were selected during Sunday’s event, including CROS Ministries, Take Stock in Children Palm Beach, Gratitude House, and Leadership Palm Beach County.