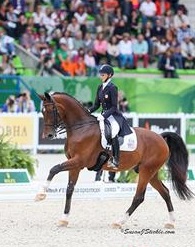 With a nearly impeccable performance, Graves (Geneva, Fla.) showed the world that she is ready to go head-to-head with the best in the sport. Riding her own Verdades, the 27-year-old produced a fluid, powerful test with highlights coming in the canter tour as the 12-year-old KWPN gelding demonstrated impressive pirouettes and tempi changes.

The nerves that had plagued Verdades in the Grand Prix and apprehension at the far end arena were nowhere in sight as the partners of 12 years produced a personal best Grand Prix Special score of 77.157% to finish in eighth place.

“There are no words for what it feels like to have a test like this with a horse you know so well,” said Graves. “I was really thrilled with our pirouttes, he stayed in all his changes at that (the far) end of the ring, and his tempis were great.”

With her strong performance on Wednesday, Graves and Verdades are among the 15 combinations which have now qualified for the Freestyle, a position she never imagined being in during her first World Championships.

“This is a dream come true; to have this happen at 27 is a fairy tale. After being so nervous yesterday he was great today,” said Graves. “To make it to the Freestyle is more than I could have imagined.”

Peters (San Diego Calif.) headed into d’Ornano Stadium as the next rider after Graves as she and applause for his teammate welcomed him and Four Winds Farm’s Legolas 92 to the arena. The 2010 Alltech FEI World Equestrian Games double Bronze medalist looked to replicate much of his ride from the Grand Prix, while executing clean one-time changes. The three-time National Champions were able to do just that, as they finished in 10th place on a score of 75.742%.

“I got the ones,” said an excited Peters. “It was a very exciting Grand Prix Special for Legolas. This has always been a difficult test for him.”

Peters will join his teammate, Graves, in Friday’s Freestyle, where he will look to continue to produce the solid work the 12-year-old Westphalian gelding has been producing all week.”

“I’m very excited to see two American flags up there heading into the Freestyle. I just hope Legolas goes as well as he has all week.”

Lyle (Ketchum, Idaho) and Peggy Thomas’ Wizard were the first American combination of day, performing their Grand Prix Special during the morning session. The 2012 Olympic Games veterans started off with a strong trot-tour, but bobbles in the latter half of the test resulted in 15-year-old Oldenburg gelding scoring 69.202%.

Lyle felt that her partner of nine years was not on the form he was during her Grand Prix Test on Monday, but is still thrilled with the gelding’s performance in their World Championship debut.

“He was not himself today; I’m not sure what was bothering him today but he just wasn’t himself,” said Lyle. “The focus was on the Team (championship which was determined by the Grand Prix) and that went really well so I’m happy.”

Great Britain’s reigning Olympic, European, and World Cup champions, Charlotte Dujardin and Valegro, again showed why they are ranked number one in the world as they added the World Championship Grand Prix Special Gold medal to their names on a score of 86.120. Germany captured the Silver and Bronze medals with Helen Langehanenberg and Damon Hill and Kristina Sprehe and Desperados FRH on scores of 84.468 and 79.762, respectively.

Dressage will come to a close at the 2014 Alltech FEI World Equestrian Games with the Freestyle on Friday afternoon.

To get an in-depth look at WEG from behind the scenes, watch episode four of Chez Philip.