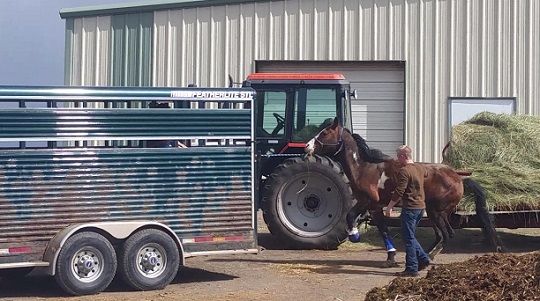 A Montana horse breeder charged with felony animal cruelty is asking the court to move his trial.

Dayle Kountz’s defense team is seeking a venue change due to concerns with local press coverage and social media attention.

Kountz allegedly failed to provide his stallion Young Doc Bar veterinary care after part of the horse’s leg fell off. He faces charges of torturing the horse and allowing a comatose calf to suffer needlessly.

The defense describes how the local media’s “sensationalized” reporting caused an “inflamed community atmosphere”. They say the potential jury pool is prejudiced.

The defense also wants immunity for three of Kountz’s potential witnesses. As it currently stands Kountz’s daughter, Kaylee Kountz, and Mandy Drysdale have asserted their Fifth Amendment rights. That means they can’t testify on Kountz’s behalf.

In December 2015, the state warned Kaylee Kountz she may be criminally liable for the abuse suffered by the stallion. The defense’s attempt to get the court to dismiss the animal cruelty case for prosecutorial misconduct was not successful.

Kountz’s attorneys argue testimony from the defendant’s daughter, Drysdale, and a third person, Silvis Robertson, are critical to Kountz receiving a fair trial.

They add Robertson will likely plead the fifth once the defense team informs him of the “prosecutor’s apparent position,” documents say. The prosecutor’s position, according to the defense, is that those who cared for the stallion “may be either accountable or fully criminally liable for the abuse suffered by the horse”.

The filing states the court should grant immunity to avoid a “distortion of the fact-finding process.”

The state has not responded to the defense’s motions.

A trial date is not scheduled, but is expected in 2017.