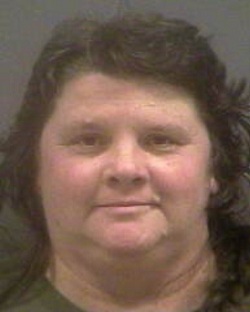 Oregon horse breeder Shaunda (Shandy) Voyles was found guilty last week of 18 counts of animal neglect and felon in possession of a firearm.

The court heard testimony regarding the substandard living conditions and lack of veterinarian care provided by Voyles. Horses “not taken out of stalls for years,” standing in knee deep manure, and animals unable to eat the food they were provided because they lacked essential dental care.

Chief Deputy District Attorney Michelle Branam says Dr. Chris Wickliffe, who operates Cascadia Equine Veterinary Clinic in Corvallis, was instrumental in the case. “To have a veterinarian come in and go through with the jury and explain how important

each item was, so they could understand, because otherwise, they would have no idea. I believe the verdict is truly because of his testimony.”
In 2011, after many complaints, more than thirty of Voyles’s animals, including 17 horses, were seized from the property in Waldport, by Lincoln County Sheriff Deputies. The property is owned by Voyles’s mother, Sarah Holmes Voyles, who was also charged. According to Branam, the elder Voyles entered into a diversion program for first time offenders.
The surviving animals including horses, dogs, cats, and goats were re-homed.
The 12-jurors found Voyles guilty on all counts after deliberating less than 3 hours. Branam says Voyles could face up to 6 months in jail for each misdemeanor count of animal neglect. The felony charge of felon in possession of a firearm has a maximum sentence of 30 days behind bars. “I will ask the judge for a 5-year ban on animals, but that is all I am comfortable discussing now.”
Voyles is no stranger to crime. She stole Rod Valencia‘s horse in 1993 while in California. Eleven years later he tracked her down, which eventually led to her indictment.
She was charged in 2005 with felony theft by receiving in the first degree, felony forgery in the first degree, felony first degree computer crimes, and unauthorized use of someone else’s livestock. In 2006, she pleaded guilty to felony forgery.
Voyles is scheduled for sentencing on September 23. Stay with Rate My Horse PRO as we bring you the latest in this case.
View Case