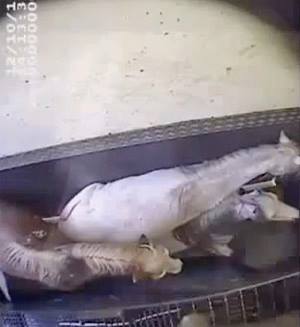 by Jeri Clausing
Associated Press
A federal judge on Friday cleared the way for horse slaughterhouses to resume operating in the U.S. as early as next week.
U.S. District Judge Christina Armijo in Albuquerque threw out a lawsuit by The Humane Society of the United States and other animal protection groups that alleged the Department of Agriculture failed to conduct proper environmental studies when it issued permits to Valley Meat Co. in Roswell, N.M., and an Iowa company to slaughter horses for human consumption.
The decision ends, for now, a two-year battle by Valley Meat to open the slaughterhouse.
The Iowa company converted to cattle because of the court fight. But attorneys say Valley and Rains Natural Meats of Gallatin, Mo., are poised to open as early as Monday.
A temporary order blocking a return to domestic equine slaughter had expired Thursday night. Attorneys for the groups that sued the Agriculture Department over its permitting procedures then filed a motion Friday seeking an extension of the restraining order.
Blair Dunn, who represents Valley Meat and Rains Natural Meats, said he would fight any further attempts to keep the plants closed. He said he had calls into the Department of Justice, which represents the Department of Agriculture, to get inspectors dispatched to the plants.
“Rains Natural Meat in Missouri will be ready to go on Monday,” he said.
The issue of horse slaughter has divided horse rescue and animal welfare groups, ranchers, politicians and Indian tribes about what is the most humane way to deal with the country’s horse overpopulation and what rescue groups have said are a rising number of neglected and starving horses as the West deals with persistent drought.
The plants would become the first horse slaughterhouse to operate in the country since Congress banned the practice by eliminating funding for inspections at the plants in 2006. It restored that funding in 2011, but the USDA did not approve the first permits for horse slaughter plants until this summer.
The companies want to ship horse meat to countries where it is consumed by humans or used as animal feed.