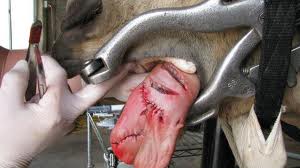 On Friday, February 3, 2012, CBS aired the trial of horse owner Deborah Dobbs vs. horse trainer Sharon Jeffco on the show Judge Judy, in a case involving alleged injury to a horse at the hands of a trainer. This case has caused quite a stir in the horse community, possibly because of the unique nature of the alleged injuries to the horse.

Dobbs sued Jeffco for $5,000 (the jurisdictional limit on Judge Judy), alleging that her 5-year-old mare, “Misty”, sustained severe tongue lacerations due to Jeffco’s training methods. Dobbs specifically complained that Jeffco used an “ill-fitting bit”. Dobbs posted this photo of the alleged injuries [CAUTION: photo is graphic]. Dobbs admitted that she was present during the entire training session in question.

During the trial on Judge Judy, Jeffco alleged that Misty had the cuts on her tongue before Jeffco started training her, but Jeffco was unaware of the wounds until they were reopened and started bleeding during the course of Jeffco’s final training session. Jeffco brought a counterclaim against Dobbs for defamation and business disparagement. Jeffco did not get to put on her full case during the trial on Judge Judy, but she posted this statement with supporting documents on her website.

The bit was not shown during the trial. As far as I know, Jeffco has not posted a photo anywhere of the bit she used on Misty during the incident in question. But a vet report included in Jeffco’s statement about what happened indicated that it was a “solid shank bit.”

This case left me wondering, “can any bit really cause this much damage during a short period of time?” I asked professional horseman Liz Payne of Unity Equestrian Arts, LLC what she thought about the evidence revealed in the trial itself. According to Payne, “There is no excuse for a tongue to be cut, ever. The amount of damage to this tongue is hard to believe. In over 40 years of training horses I have never seen anything like this, in fact I have never seen a cut tongue. I have unanswered questions. Someone is responsible for the damage to the horse. The sorting out who caused this horrific damage seems to be the difficult challenge. There is never an excuse for damaging a horse, physically or mentally.”

Without opining on who was liable for the horse’s injuries, the judge awarded zero damages to both parties on their claims. Below are some of the reasons (potential litigants, take note!):

1) Neither party brought a veterinarian with them to the trial. Only Dobbs had a report from a veterinarian who actually treated the horse. The judge seemed to lend little credence to the reports from Jeffco’s vets who had not seen or treated the injuries. Parties to horse injury suits should always bring a vet with them to testify, and preferably one who saw the horse as opposed to someone who drew conclusions from documents, photographs, radiographs, etc.

2) Dobbs witnessed the incident in question, but she did not leave the premises with her horse as soon as she allegedly believed that Jeffco was using abusive methods. This admission detracted from Ms. Dobbs’s credibility with the judge, especially with respect to Dobbs’s allegations that Jeffco tied the mare’s head down and used a longe whip on the horse.

3) Jeffco paid Dobbs $953.50 in restitution in a related criminal animal cruelty proceeding. Judge Judy ruled that Jeffco waived her defamation claim when she paid the restitution to the plaintiff. The judge further ruled that Dobbs had been fully compensated by the restitution check in the criminal case, and therefore awarded her $0 damages. The effects on a civil case of actions taken in a related criminal case is something clients should discuss with their counsel before taking action.

4) Jeffco and Dobbs repeatedly make comments to one-another during the trial. This agitated the judge (as it is considered unacceptable behavior in any courtroom). As such, the parties’ conduct at trial may have made the judge more inclined to give both parties nothing.

I in no way condone the use of training methods that might cause these types of injuries to a horse. But it should be noted that trainers might protect themselves from unfounded claims of horse injury or abuse by having all training clients sign a written training agreement, whereby the client releases the trainer of liability should the horse be injured in training and/or if the training does not achieve the desired results.