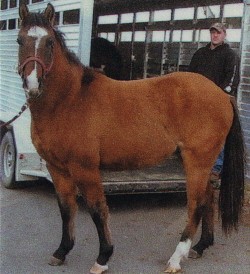 “We’re here to take care of them. I just can’t wrap my head around it.”
Luana Middleton says her excitement turned into horror when she looked into the trailer. The formerly bright-eyed gelding was thin with his ribs showing and covered in mud and manure. He was standing on three legs with puss dripping from his right hock.
Middleton purchased a young but willing dun quarter horse gelding to be the future trail mount for her grandchildren. He earned the name Valiant from Middleton’s granddaughter. The child was the first to earn the golden gelding’s trust.
Middleton’s farrier and self-proclaimed horse whisperer, Troy Mortensen, of Utah insisted for months to let him take the gelding for training. Finally giving in, she sent the healthy two-year-old gelding for a month; which would turn into two when he didn’t return the gelding as agreed.
It was when Valiant was returned in a tiny two horse trailer in early February that she made the horrifying discovery. Middleton says she didn’t even unload Valiant. Instead, she rushed him directly to the vet.
Mortensen reportedly tried to 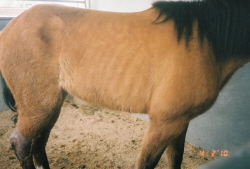 convince Middleton that the injury happened in the horse trailer.
Middleton says when they arrived at the vet’s office Mortensen boasted about taking an equine nutrition class. He claimed he put Valiant on a diet “because he was so fat.” Middleton says she couldn’t believe what she was hearing.

Ultimately the vet had a different opinion regarding when the injury occurred. He treated Valiant aggressively over the next five days. The injury changed the course of his life when the infection reached the joint. That’s because, with serious horse leg injuries, the opposite leg sustains injury as well from bearing extra weight.

With no hope for recovery and his quality of life diminishing by the day they reached the decision to euthanize him.

Days later, Middleton called Mortensen to let him know Valiant had to be put down. She says she was shocked by his callous reaction. Unable to allow Valiant’s death to go unaddressed, she filed suit in small claims court. The details of Valiant’s tragic death caught the eye of producers for the syndicated TV Court Series ‘Judge Joe Brown’.
In front of Judge Joe Brown and America, Middleton alleged that Mortensen’s care for Valiant was negligent as well as abusive. She asked for just over $2000 to cover the now deceased horse’s training and vet fees. Even without the examining vet in the courtroom and trainer Mortensen claiming “flat out bad luck,” the judge decided Valiant didn’t receive the necessary care Mortensen should have provided.

Middleton now says, “I’m just left to wonder, how he had the guts to bring him back in that shape.” Moreover, she says she is angry at herself for even letting him take the horse.

Even with the judgment, Middleton says she still “felt helpless.” 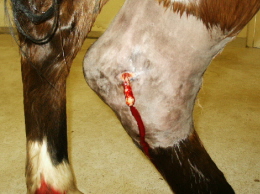 It’s difficult to trust people you don’t know with your horse. You can request and check references; however, those are always the references hand picked by the horse professional.

Now, Rate My Horse PRO provides horse owners with crowdsourced reviews of horse professionals (horse PROs). You, too, can share your personal experiences after hiring horse PROs, including horse trainers, farriers, and more.
Middleton says about Rate My Horse PRO, “I’m elated to know there is someone doing something to help warn others.”