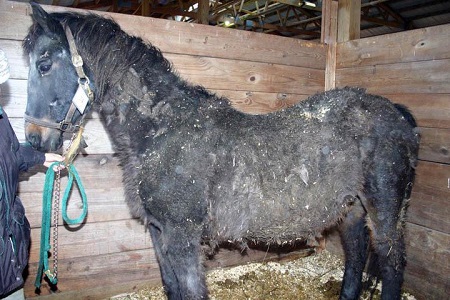 One of twenty stallions seized from Beth Hoskins in 2010.

Convicted horse abuser Beth Hoskins was to check in with officials, Friday at 5PM, after a judge denied a stay of her sentence. Hoskins failed to arrive on time for her court appointed stint behind bars, arriving about one-hour late.
On Friday, Hoskins’ attorney Thomas Eoannou asked Erie County Judge Michael Pietruszka to stay her 90-day jail sentence. Eoannou’s request was denied by Judge Pietruszka.
Earlier this week, Aurora Town Justice Douglas Marky sentenced the former Morgan horse breeder to 90-days in the Erie County Correctional Facility for five probation violations connected to her animal abuse conviction. She was accused of multiple violations included failing to report to her probation officer, not providing veterinary reports, failing to obey the court’s orders, not maintaining her barns in a safe and sanitary manner, and failing to provide truthful information to a veterinarian about the number of staff members caring for the horses.
The SPCA seized more than 70 horses in early 2010 from Hoskins, citing allegations of abuse. Hoskins was convicted in 2013 of 52 counts of misdemeanor animal cruelty. She was sentenced to three-years probation, a fine of $52,000 and community service.