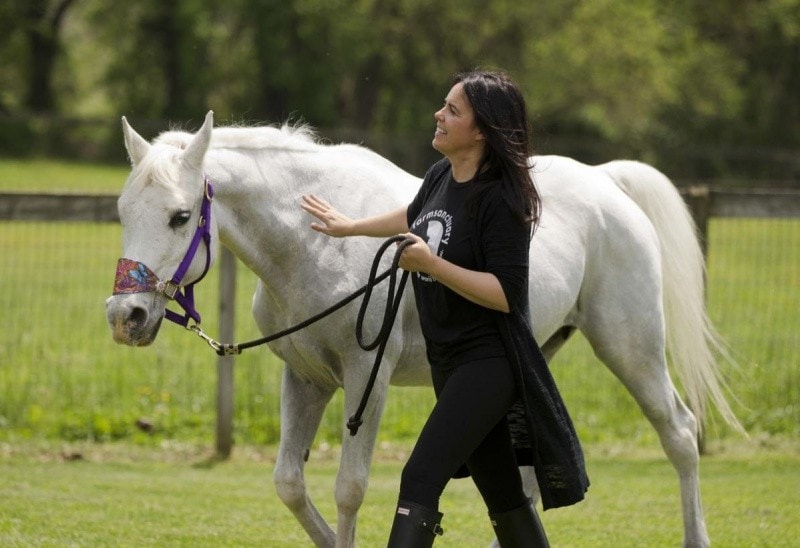 Lily lives with John Stewart and his wife Tracey.

Comedian Jon Stewart and his wife are giving a recently discarded mare her forever home at their New Jersey animal sanctuary.

Lily was reportedly shot more than 100 times with paintballs although we now know that isn’t true. Someone seemingly abandoned the emaciated mare at the New Holland Sales Stable after an auction in March it appeared but we’ve learned the truth behind Lily’s history.

An animal abuse investigation ensued due to the mare’s emaciated condition, body soreness, and overall poor health. Lily was barely able to see because she was blind in one eye and the other was swollen shut. The Lancaster County SPCA investigated the abuse case and said the mare was shot with paintballs.

Lily underwent eye surgery at New Bolton Center to remove her right eye. She has been recovering.

Lily’s adoption became final Friday with her grand entrance at Bufflehead Farm with Tracey Stewart. Lily will live out her remaining days at the farm. The Stewarts also adopted Lily’s pasture buddy Anita who we told you about previously.

Lily’s story has a happy ending.

She is one of the lucky ones.

We now know how the aged mare ended up in the hands of horse trader and convicted animal abuser Philip Price of Rhode Island. Lily’s former owner Doreen Weston, of New Jersey, gave the mare to Price.

Weston says, “she was a great horse, but she became a danger to us, herself and the children here.” Although Weston no longer had a need for Lily, she says she thought Price could find the mare her next home. “I’ve bought horses from him before,” Weston defends.

Horses like Lily who outlive their usefulness are often seen as a burden or disposable after providing years of money making services for their owners. Weston adds she probably spent more on the mare’s eye and health issues than the mare brought her in revenue.

Weston is speaking out on the day of Lily’s adoption to dispute claims the mare was shot with paintballs. “Its a lie.”

Weston says she contacted Lancaster County SPCA Director Susan Martin and spoke with her about the finger painting parties, but the paintball misinformation was allowed to persist. Weston says her subsequent messages to Martin have not been returned.

We left the SPCA’s Martin a phone message but never received a callback.

When we asked Weston why she didn’t have the mare humanely euthanized Weston said, “I will not have something winched up – [it’s] not a pretty sight for something you’ve loved, I assure you.”

And Weston says she did what she thought was best for her people.

Weston adds she did nothing illegal. She wasn’t so confident when asked if what she did was ethical.

Weston admits her reputation in the horse community is suffering due to the situation but says she is happy it “worked out” for the mare.