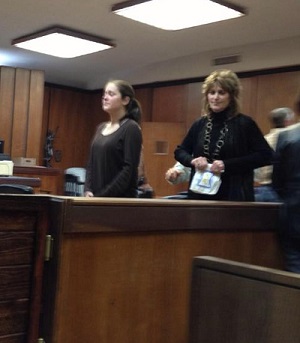 Jaci Jackson walks out of the court room in handcuffs.

An Oklahoma judge sentenced barrel racer Jaci Jackson to 42 months behind bars for her role in the theft of five horses from the Southern Arkansas University rodeo team.
Jackson pleaded guilty in August 2013 to felony animal cruelty, knowingly concealing stolen property, bringing stolen property across state lines, and arson. The felony animal cruelty charge was dismissed Monday since there was no proof that Jackson was present when the sorrel roping horse named Credit Card was killed.

Five horses, a horse trailer, and tack were stolen from SAU’s rodeo stable in November 2011. Four of the horses were found emaciated in Oklahoma, tied to trees and left to die. Credit Card was found dead. The quarter horse gelding had been shot, his throat slit, and his body dismembered.
Jackson received no deal from McCurtain County District Attorney Mark Matloff who told the court, without Jackson’s involvement, the crimes would never have happened.
Her defense attorney, Richard Stout, argued that Jackson’s mother, and co-defendant, was a bad influence. Jackson remained stoic during the two-hour hearing. When given the opportunity to speak, she read a letter and apologized.
The unimaginable case captivated the nation and inspired the creation of a group of about thirty people from as far away as Rhode Island called the SAU-CC Justice League. Five members were at Jackson’s sentencing. Tammy Robinson, the group’s founder, said, “I was hoping she would get at least ten years… but I am happy she got time behind bars.”
Judge Gary Brock characterized the animals as “targets” and told Jackson she should have known better.
Three co-defendants, including Cox, have been sentenced in connection with the case in Arkansas. Jackson is scheduled to be sentenced there on February 6.